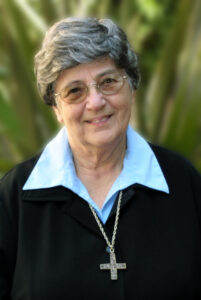 Sr. Ann Carmel Badalamente says that her first exposure to the Notre Dame Sisters was as a student at Sacred Heart Elementary School in downtown San Jose and later, at Notre Dame High School. When several of her friends were entering the convent after high school, she chose instead to work in the family grocery store. As one of seven children, she stocked shelves and not only took orders, she also delivered them. After three years she decided she did want to enter the Notre Dame de Namur community.

One of her especially energizing assignments was as a “foundation stone” for St. Thomas More School in Lynnwood, Washington, which started with grades one through three. She helped the school develop into the elementary and junior high school it is today. “It’s still going strong!” she comments. “I felt the affirmation and privilege of being entrusted with beginning this school and being named its principal. I loved the community and the children.”

Sister Ann Carmel recalls with fondness another achievement while she served as principal at St. Lucy School in Campbell. She recruited Sue Grover, a former student, for a teaching position. Sue remembers, “Sr. Ann and I met and I instantly liked her. Being a naïve first year teacher, I was grateful for her guidance. Her humor, kindness and willingness to help are the special gifts that I will always treasure.” Sue went on to teach eighth grade, then became principal, where she serves to this day. Sr. Ann Carmel is proud that Sue continues to emphasize the teachings and spirit of St. Julie. 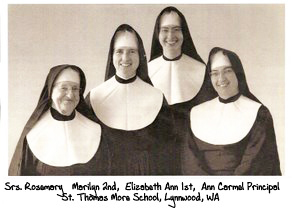 Sacred Heart Elementary School, where, as a child, she first met the Sisters, closed in the 1970s. For several years though, she volunteered with fellow-alumna Sr. Yvonne Bondi in the library at the Jesuit-run Sacred Heart Nativity School it became. This coming full circle appealed to Sr. Ann Carmel.

In 1992, Sr. Ann Carmel began serving as the Office Manager at the Provincial House in Saratoga. When the time came in 2003 to sell that property, she assisted with the monumental task of moving from Saratoga into the newly constructed Province Center in Belmont. Because of Sr. Ann Carmel’s warm and friendly presence, she was asked to serve as the receptionist in the new Province Center–a position she held for many years. Again, Sisters Ann Carmel and Yvonne would work side by side as volunteers there – another full circle!

Over the course of her long and varied career, Sr. Ann Carmel received her master’s degree in administration from San Jose State College. She has also served for 35 years as the Coordinator of the Car Committee, which involved procuring, registering, maintaining, insuring, and selling the vehicles driven by the Sisters.

With family and friends, Sister celebrated her 90th birthday in 2019. She now assists the Province Development office, along with other special projects. She enjoys life at the Province Center. She thanks God for her good sense of humor — and so does everyone who knows her!

“When I started as a Sister of Notre Dame, I did not imagine that life as an SND would be so interesting. I could go ON AND ON about all the amazing things I’ve experienced over the past 70 years!”