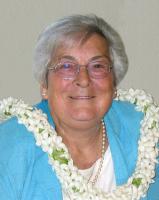 A dedicated educator for 52 years, Sr. Aileen served as teacher and administrator for Notre Dame elementary and high schools including those in Alameda and Marysville and at Holy Family School in Honolulu.  While teaching English at Notre Dame High School, San Jose, she also enjoyed directing many memorable theatre productions.  For 11 years Sister was principal at Sacred Heart School, Saratoga, where parents praised her as always having the best interests of the students and parents at heart.  Sr. Aileen later volunteered at Notre Dame Elementary School and at the Province Center in Belmont, where she resided until moving to Mercy Retirement and Care Center in Oakland in 2009.

Sr. Aileen was preceded in death by her parents, William and Mary (Ashe) Donohue, and her sisters Teresa Kettmann and Mary Margaret Nielson. She will be deeply missed by her siblings, Barbara Amsbury and James Donohue, and her devoted nieces and nephews, Dennis and Dorenda Kettmann, Patrick and Julie Smith, Robert and Maria Kettmann, Mark and Cristy Kettmann, David and Terri McClenahen, Dan and Joan Ramey, and Tim and Mary Kettmann. She is lovingly remembered by her many former students, friends, and her Sisters of Notre Dame de Namur.