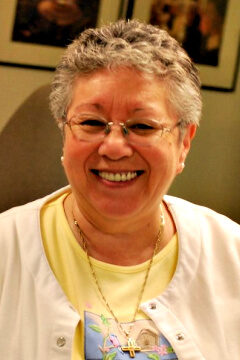 "What does a 17-year-old know of vocation? I entered out of curiosity. I was nosy!" Sister  Andrea (Teresita) Mendoza recollects some decades later. "I gradually moved into this life and learned this IS where I belong."

Sister Andrea became an elementary school teacher, serving twice at St. Columbkille School in Los Angeles, and later was principal at Notre Dame School in Folsom, Calif. She also spent time working in an economically-disadvantaged area in Mexico, where she said that she came to appreciate the "important things in life."

Later, after going back to school to earn a master's degree in marriage and family counseling, Sister moved into parish ministry with an emphasis on working with the elderly. One of her greatest blessings was the opportunity to assist people who were close to death. She believes, "That passage is such a sacred and holy time." Her counseling career has been varied, and she has both served as an advocate for female victims of domestic abuse and taught anger management classes to male abusers. For three years, Sister served on the National SNDdeN Formation Team.

For five years, Sister Andrea served as a pastoral associate at St. Lucy Parish in Campbell, Calif.,, working with the Hispanic community there. Sister helped train lay leaders and worked with engaged couples. Father Kevin Joyce said of Sister Andrea, "She communicates genuine love for God and his people by her way of being and by the way she treats people. She has the rare combination of being kind and compassionate yet strong and decisive. She's a real leader and a great gift to St. Lucy's."

After 60 years of service and life as a Sister of Notre Dame, Sister  Andrea believes that "everything has fallen into place." Her work today uses every aspect of her skills and life experiences and is the perfect fit!