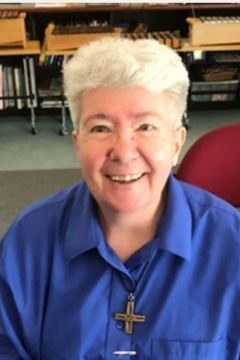 Angele first met the Sisters of Notre Dame when she began attending College of Notre Dame in Belmont, now known as Notre Dame de Namur University. She grew up in Vallejo, Calif. and went to St. Vincent Ferrer Grammar and High Schools with the San Rafael Dominicans.

After entering the Sisters of Notre Dame de Namur in 1972, Angele taught a year at Sacred Heart School in Saratoga, Calif. and lived in community with Sisters Anne Stubbe, Cecilia Wallace, and others. She then joined other novices for a year of formation in an intergenerational community at the Novitiate in Ipswich, Massachusetts. After that year, she returned to California and lived in the large Ralston Community in Belmont. She made her first vows in 1975 and final vows in 1981 in the Cunningham Chapel at the College of Notre Dame.

Sister Angele’s first mission assignment was to Notre Dame High School in Belmont, where she served in numerous capacities for the next 25 years! She taught religious studies and served as the campus minister. She oversaw the photography, moderated the yearbook, served as the master scheduler and the guidance counselor, and even became the Director of Admissions and Director of Advancement. Franca Marchetti fondly remembers the years when her daughters attended the high school. She recalls Sister Angele being “full of life and vigor; she always had a smile on her face and a sprite stride. She was never in a bad mood.”

In 1999, Sister Angele’s creativity and eye for design led her to concentrate on doing graphic design and desktop publishing for churches and non-profits (“Simply Put”). The Sisters of Notre Dame de Namur also asked her to use her talents in designing materials for their National Vocation Team. In 2003, she moved to Ipswich, Massachusetts to continue with that work before she was asked to assist in the International Communications Office of the Congregational Mission Office.

The range of Sister Angele’s contributions has been as varied and extensive as it was at Notre Dame, Belmont!

Sister Angele continues to lend her artistic talents and positive energy to Notre Dame de Namur projects across the United States and around the world.