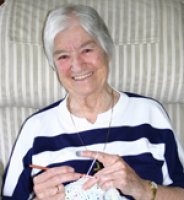 Agnes first met the Sisters at age 12, when she went to boarding school after her father’s death so that her mother could go to work.  Agnes found a second family with the Sisters who loved and cared for her.  After graduating from Moreland Notre Dame Academy in Watsonville, Agnes entered the Novitiate.

Sister's first teaching assignment was with the third grade at St. Columbkille School, Los Angeles, in 1938. A few years later, she was sent to San Francisco, first to Notre Dame, the girls' school, then to Mission Dolores to the first grade boys. "They were like a basket of puppies," she remembered.

Sister first became principal at Sacred Heart Parish, Saratoga, where she opened the parish school and taught 4th grade – they had begun with just four grades as was common in those days. Not long after, she opened St. John's-Notre Dame Elementary in Folsom before returning to St. Columbkille's as principal. In August 1965, the Watts riots erupted, engulfing the neighborhood in racial violence. When school opened the next month, Sister Agnes and her teachers provided a safe, stable learning environment for children who had witnessed the violence.

Sister Agnes' last assignment was to St. Joseph's Elementary in Alameda. She had taught there many years before, but returned as resource center coordinator, librarian and assistant teacher. She stayed for 20 years until she retired in 1997. "No matter where I was teaching," she says looking back, "I loved the children. I treasured the warmth of those who wanted to receive, especially parents whom I could validate in their efforts to raise their children."

Sister Agnes (Marie Josepha) Anzoli always kept a slip of paper, no more than 6 inches by 2, with the school, grade and dates for each school where she taught, for nearly 60 years. "These are more than my memories," she says, "These are my life. I just loved the children."

Click here to give a gift in her memory.

Please do share your memories of Sr. Agnes Anzoli with us.