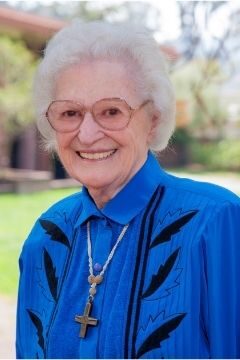 Born in Gonzales, Calif., Bernice and her five sisters all attended Sacred Heart School in Salinas. Her parents then enrolled her as a boarder in Moreland Notre Dame High School in Watsonville. She came home on weekends, and in her sophomore year started working as a stock girl on Saturdays at ‘The Elegant Dress Shop’. She made a grand total of $3.00 each Saturday. She progressed at the store and after graduation, her boss wanted her to work full time and even go on buying trips. Tempting as it was, Bernice had other plans in mind and told her boss she was entering the convent.

When she initially told her mother she was thinking of entering the convent, her mother said, “Sit down. You’ll feel better after you’ve had a hot dinner.” Bernice did feel better after dinner, but still felt called to become a Sister and join her sister who had entered the Saratoga novitiate previously. Sister Bernice remembers one of her early days with a smile. Her sister, Sister Joseph Julie, had heard her playing boogie-woogie music on the novitiate piano and told her perhaps that was not the best choice!

As Sister Madeline Marie, Bernice became a teacher and found that teaching was a natural and joyous fit, one she excelled at for 63 years. Sometimes though, she shook her head in amazement at the things she was asked to do, like teach 75 first graders at Dolores School in Santa Barbara! Or start a choir for third- to sixth-graders at Notre Dame School in Yuba City. With musical abilities, but no experience teaching choral music, the assignment was challenging to say the least. But as Sister learned early on, “You get the grace of the charge.” Within a year she was teaching the children three-part harmony.

Maureen O’Hara, a former student in the first graduating class from at St. Philip Neri Elementary School in Alameda, said that Sr. Madeline Marie, her “beloved principal and eighth grade teacher … was really special to the entire class.” Maureen became an oncology nurse at Stanford and stayed in touch with Sister throughout her life.

For 27 special years Sister Bernice taught language arts at Madonna del Sasso School in Salinas, stressing the importance of speaking and writing correctly. In 2008, her students and the Salinas community surprised her with the Crystal Apple Award–an honor given to outstanding teachers who daily go “above and beyond” for the students and the school. The Sisters in Salinas still hear from former students who have appreciated what they learned from Sister Bernice.

Another great love for Sister was serving as a lector at Mass for ten years. Reading and proclaiming God’s word gave her immense joy.

The Sisters are grateful to healthcare coordinators Ann Comer and Sister Sharon Joyer, SNDdeN, and to Mercy Retirement & Care Center in Oakland, where Sister Bernice received excellent care. She will be deeply missed by her many friends, former colleagues and students; by her sisters, Dolores Heinz Pia, JoAnne Heinz Sinatra and Barbara Heinz McDermaid: her nieces and nephews, and by all her Sisters of Notre Dame de Namur. Her sisters Rosalie Heinz Rebello and Sister Marie (Joseph Julie) Heinz, SNDdeN predeceased her.

Sister Bernice's funeral was delayed due to Covid-19 restrictions, but will be celebrated on Saturday, April 2, 2022 at 11:00 a.m. at Cunningham Chapel on the Notre Dame de Namur University campus in Belmont, Calif.