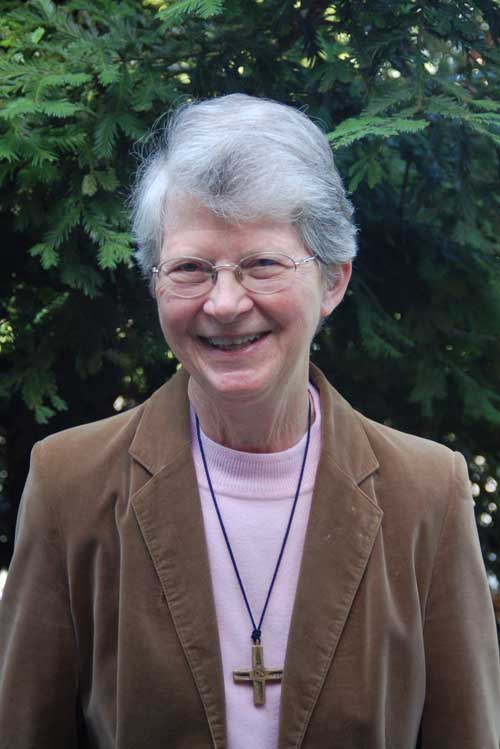 Carolyn Buhs made her first contact with Notre Dame at St. Dunstan's School, Millbrae. Her 4th grade teacher, Sister Marie Joseph, became a lifelong friend and mentor. The story of then "Blessed" Julie Billiart made a deep impression. To Carolyn, Julie became a real person and influential in her choice to enter the congregation.

The notion of going to the missions came early also. Sr. Carolyn (Mary Charles) describes how in 5th and 6th grades her desire was fed by stories in the Maryknoll magazine. In 7th grade she earned a Girl Scout horseback riding badge hoping to ride horses on mission like Maryknoll missioners in the Andes. But Notre Dame beckoned, and the experience of California SNDdeNs going to Brazil in the early 1960s raised her hopes. When she requested missionary service, she was sent to Hawaii–a wonderful four years of sunshine, swimming (by that time allowed) and hiking (which she loved), but not exactly what she had in mind.

In the meantime, with the guidance of Sr. Anna Voss, Sr. Carolyn had found her love of geography and had begun a master's degree in that field from Cal State, Los Angeles. She had also discovered that she was slow to learn other languages, which limited her choices for overseas mission. But, while in Hawaii, she had begun the study of Kiswahili, a widely used African language.

Finally in 1976 she was sent to Kenya to teach in Egoji Teachers' Training College where she stayed for 10 years. A former student, Francis Kithinji, now principal of a secondary school and working for his master's degree at Kenyatta University, recently wrote to Sr. Carolyn asking her permission to dedicate his thesis to her and his late father.  Sister was for him "the pearl and shining star in my life…my inspirer."

Nearby Sudan had a large Christian population in the southern part of the country and the need for service to that population was great. For the next six years Sister worked in northern Sudan, all the time studying Arabic while she taught displaced people from the south. When the unrest of war spilled over the border into Ethiopia a large refugee camp was established in northwest Kenya. She spent three years here with Sr. Mary Ellen Howard and other women religious working with refugees, including the "Lost Boys of Sudan," who found their way into the camp to escape the wars. These boys had lost family members and homes and were in great need of education as well as religious support. Sister created the camp's first library. Anticipating the future, Sr. Carolyn spent three more years teaching Sudanese students in Kenya and training catechists. Her last assignment in Kenya was as Postulant Director of young women who were coming to enter the Sisters of Notre Dame.

Sister returned stateside for a few years working in both the NDNU Registrar's office and the SND Archives office. But in 2011, it was with much excitement that Sr. Carolyn returned to the Sudan under the auspices of Solidarity With South Sudan, an inter-congregational religious community, where she teaches teachers and helps prepare teaching materials.

She says of her nearly 60 years as a Sister, "My thoughts are filled with gratitude to our Good God for Her great mercy in loving me and my family and bringing me to Notre Dame and blessing me with such wonderful years of ministry in Kenya and South Sudan. Reflecting on the thread of events through my various ministries fills me with wonder at how God does work in our lives."

To read updates from Sr. Carolyn and the director of Solidarity With South Sudan click here.