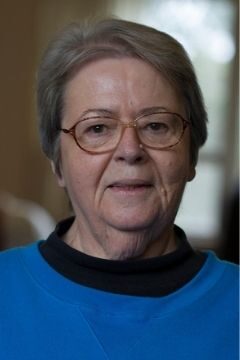 If you were to ask Sister Eileen McCarthy to describe herself, she would most likely decline. However, if you were to ask anyone else who knows her, there wouldn’t be enough words or time to describe how generous and good she is because, as Sister Georgianna Coonis says, “that’s just the way she is.”

She loved working with young people and they loved her. Cindy Vrooman, a long-time friend of Sister Eileen, remembers a visit to her when she was teaching at Most Holy Trinity School. “[Sister Eileen] had evidently told the children I was coming. I appeared at the door and, not wanting to disrupt the class, waited to catch her attention. A student looked up and quietly went to Eileen and ever so politely said, 'Sister, we have a visitor.' The way the students looked up at me I felt like Mary Poppins. They were so welcoming, and that reflects the spirit of Eileen.”

Sister Georgianna Coonis also recalls living with Sister Eileen in a convent in Covina that was frequently visited by mice that roamed the nearby fields. “We were not allowed to even mention the word ‘mice’ in the presence of Sister Eileen, who instead referred to them as ‘ducks.’ Visitors would occasionally be puzzled to come across a note on a cupboard door that read ‘Ducks! Do not open!’ “

When several Sisters were living at the Hermitage Arms Apartments in San Jose, the manager became ill, and Sister Eileen was asked to help manage the building "just for a short time;" she was a natural at responding kindly to the wide range of requests she was asked to consider. She never would have imagined that she would manage the apartment building for eight years!

Since moving to the Province Center in 2016, she has been chauffeuring Sisters to the airport and to medical appointments and assisting with other kinds of errands. She also writes cards for those who are participating in the Memorial/Tribute Program.

Sister Eileen doesn't know the meaning of, “no” and is always available to help. One thing's for sure, as Cindy says, “a visit with her lifts your spirits and makes you laugh.” With a ‘heart as wide as the world’ and a wonderful laugh, who wouldn’t want to get to know Sister Eileen?!