As Jesus passed by he saw a man blind from birth. His disciples asked him, “Rabbi, who sinned, this man or his parents, that he was born blind?” Jesus answered, “Neither he nor his parents sinned; it is so that the works of God might be made visible through him. We have to do the works of the one who sent me while it is day. Night is coming when no one can work. While I am in the world, I am the light of the world.” When he had said this, he spat on the ground and made clay with the saliva, and smeared the clay on his eyes, and said to him, “Go wash in the Pool of Siloam” —which means Sent—. So he went and washed, and came back able to see.

His neighbors and those who had seen him earlier as a beggar said, “Isn’t this the one who used to sit and beg?” Some said, “It is,” but others said, “No, he just looks like him.”

They brought the one who was once blind to the Pharisees. Now Jesus had made clay and opened his eyes on a sabbath. So then the Pharisees also asked him how he was able to see. He said to them, “He put clay on my eyes, and I washed, and now I can see.” So some of the Pharisees said, “This man is not from God, because he does not keep the sabbath.” But others said, “How can a sinful man do such signs?” And there was a division among them. So they said to the blind man again, “What do you have to say about him, since he opened your eyes?” He said, “He is a prophet.”

Now the Jews did not believe that he had been blind and gained his sight until they summoned the parents of the one who had gained his sight. They asked them, “Is this your son, who you say was born blind? How does he now see?” His parents answered and said, “We know that this is our son and that he was born blind. We do not know how he sees now, nor do we know who opened his eyes. Ask him, he is of age; he can speak for himself.” His parents said this because they were afraid of the Jews, for the Jews had already agreed that if anyone acknowledged him as the Christ, he would be expelled from the synagogue. For this reason his parents said, “He is of age; question him.”

So a second time they called the man who had been blind and said to him, “Give God the praise! We know that this man is a sinner.” He replied, “If he is a sinner, I do not know. One thing I do know is that I was blind and now I see.” So they said to him, “What did he do to you? How did he open your eyes?” He answered them, “I told you already and you did not listen. Why do you want to hear it again? Do you want to become his disciples, too?” They ridiculed him and said, “You are that man’s disciple; we are disciples of Moses! We know that God spoke to Moses, but we do not know where this one is from.” The man answered and said to them,“This is what is so amazing, that you do not know where he is from, yet he opened my eyes. We know that God does not listen to sinners, but if one is devout and does his will, he listens to him. It is unheard of that anyone ever opened the eyes of a person born blind. If this man were not from God, he would not be able to do anything.” They answered and said to him, “You were born totally in sin, and are you trying to teach us?” Then they threw him out.

When Jesus heard that they had thrown him out, he found him and said, "Do you believe in the Son of Man?” He answered and said, “Who is he, sir, that I may believe in him?” Jesus said to him, “You have seen him, the one speaking with you is he.” He said, “I do believe, Lord,” and he worshiped him. Then Jesus said, “I came into this world for judgment, so that those who do not see might see, and those who do see might become blind.”

Some of the Pharisees who were with him heard this and said to him, “Surely we are not also blind, are we?” Jesus said to them, “If you were blind, you would have no sin; but now you are saying, ‘We see,’ so your sin remains.”

Because I am a music lover, a song and poetic enthusiast, I delight in the various melodies that have been created to accompany God’s word. They can and often do touch our hearts with wisdom and renewed understanding. And so today, as we ponder John’s full-fledged version of the blind man’s story, I think of the hymn “Look beyond: give us a sign that we might believe in YOU.”

May we look beyond the healing happening at the touch of Jesus and wondering about the crowd’s negative response to this sight-seeing miracle!

My first encounter with a blind person happened when I was a little girl. I witnessed a woman with her white cane walking slowly on the sidewalk. I glanced with my question-mark look at my mom who quietly explained that the woman was blind and could not see. I immediately shut my eyes to see what it feels like not to see. I was not happy with this experience, so I quickly opened my eyes again. My wondering has never ceased, even now as we reflect on this biblical blind man.

And I wonder:
Were you there when his darkness turned to light? Were you there when his vacant vision turned to sight?
Today is not like any other day in his blind-from-birth, unseeing life. The touch of Jesus with a bit of homemade clay became a surprising gift of renewed sight! His eyes had opened! He could see! Oh, let it be: he could see! He could see! We celebrate his story, his song of sight-seeing delight on this fourth Sunday of Lent. Wonder of wonders: colors everywhere! Multi-colored flowers brightly singing their own song while blooming in the sun! Smiling faces, some with frowns; sheep and shepherds keeping track of wandering ways. Happy children climbing trees; food-sharing bunches of folks who had gathered to be part of the crowd – where the action was usually found – with Jesus!

Why then the ugliness that followed? Why search for reasons that the healing should not have happened? Why cast aspersions on Jesus, Healer, Lover of all people?

Continued questions of how, when and where the healing took place. Questions to the once-upon-a-time, now-healed blind man. Questions to his parents. Closed questions to which the crowd was convinced they knew the answers. But they were wrong. The healed man was right. He knew what had happened to him and he was glad. He was able to look beyond the criticisms of the crowd. And the end of his story brings him back to the beginning: his closing conversation with Jesus.

When Jesus heard that they had thrown the man out, he found him and said, “Do you believe in the Son of Man?” The man answered saying, “Who is he, Sir, that I may believe in him?” Jesus said to him, “You have seen him and the one speaking with you is he.” He responded, “I do believe, Lord,” and worshipped him.
This is not the end of a story. It is an invitation to dream impossible dreams for and with others, the troubled who can only see helplessness in their lives. God has done great things for us. In God’s goodness and with our faith, I do believe that there are no impossible dreams!

How good is the Good God! 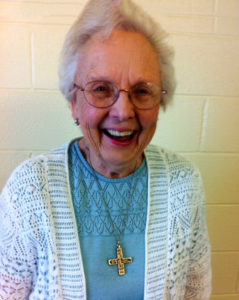 You show me the path for my life, in your presence the fullness of joy …” Psalm 16, verse 11

The seed of Edna Maier's desire for religious life was planted early on in her childhood. She thought when she entered the convent immediately after high school that it was a “fait accompli” that she would eventually teach French in high school as her favorite SNDdeN teachers had done. But that never happened! God’s initial plan for her life was mathematics: first in grade school in Staten Island, next in high school in Norfolk, Virginia and eventually at Norfolk State University, a black college which was seeking at the time more women and more white instructors on the staff. It was 1970 and Sr. Edna looked forward to the challenge.

Some of the students from the interfaith group were fascinated at having a nun on the campus and they invited her to be a guest speaker at their weekly meetings. Seven years later, she requested and received permission to be part of a Family Mission Preaching Team which was initiated by Clem Burns, OP. It was a turning point in the path for her life.

For twenty years she traveled throughout the United States with the preaching team, giving week-long parish retreats wherever they were invited. Other opportunities for preaching the Gospel emerged as various SNDdeNs encouraged Sr. Edna to write articles for various newspapers. These became a special joy to her since she never thought a mathematician could or should write! Published articles in the Philadelphia Catholic Standard and Times which were reprinted in the Catholic Digest became the prelude to six years of writing columns for two secular newspapers in Virginia.

In 1997, when her preaching partner was given a new assignment, Sr. Edna looked for and found opportunities to minister as pastoral coordinator in four priestless parishes in West Virginia and Virginia. The path for Sr. Edna's life had taken a lovely turn. Finally, in 2005, she felt the call to return to Baltimore, one of the more populated SNDdeN centers, so she could be more in touch with sisters in the SNDdeN clan.

Officially, Sr. Edna is now retired. But as a Maier, she will never be inactive! The path for her life continues to beckon her to new and blessed ways to share the Gospel with God’s people. One of these days you might even find a book by Sr. Edna as she shares her vision of our extraordinary God who speaks in such ordinary ways as he shows us the paths for our lives.