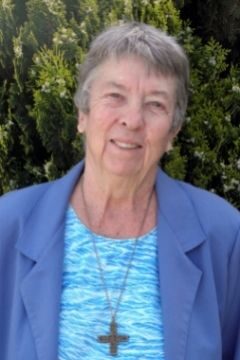 From the time she was a child at St. Bernard's School in Oakland, Ca., and later at Notre Dame High School in San Jose, Ca., Geraldine Harris always liked the Sisters. At that time, she remembers, "I wasn't the type that the Sisters would have encouraged to enter the community. I was always talking and not exactly a good student." Just the same, right before graduation, Sister Mary Henrietta, the superior of the convent, asked her if she had ever considered being a Sister. "Oh, no," she responded, having read a lot about women reporters, "I'm going to be a newspaper reporter." By the end of the summer she had reconsidered and wanted to become a Sister but, wisely, decided that she would wait a while. She started college at San Jose State University, and a year and a half later entered the postulate in Saratoga, Calif.

After making her vows, Sister Geraldine (Geraldine Marie) enjoyed teaching seventh and eighth graders in Notre Dame schools throughout California for 22 years. When her niece, Susan, was born with special needs, Sister Geraldine realized how limited the child's opportunities would be and immersed herself in a study of special education and for a time worked at Hope Rehabilitation in San Jose.

When she was ready to turn a dream into reality, she opened “Susan House,” a board and care home in Campbell, Calif. There, in a simple house on a quiet street, and with the help of her partner, Sister Claire Spellman, and other Sisters and friends, Sister Geraldine provided a safe and loving home for women with special needs. Sister Claire remembered how beautifully Sister Geraldine interacted with the girls, always loving but strict when necessary. "She taught them a lot," Sister Claire remembered. "They learned to take the bus, to come home on time. They did their own laundry, kept their rooms orderly and helped in the kitchen." Looking back, Sister Geraldine says, "People with special needs are often exploited, disregarded and materially poor in our society. Susan House was St. Julie's work–to care for poor women and children, to foster their human dignity."

Sister Geraldine continued this work for 23 years, then moved to Watsonville, Calif. Still concerned for the poor, she immediately volunteered at St. Francis Catholic Kitchen in Santa Cruz, Calif. Director Richard Crowe worked with Sister Geraldine when he began this work in Santa Cruz. “Many of our people have mental health problems and she has a very disarming way with them. She had a generosity of spirit, a gentle, quiet spirituality and a great wit." He appreciated the support he has received from her personally, as did the volunteers. "She's part psychologist, part spiritual director," he said. "She was part of the family here."

Now celebrating her 70th Jubilee, Sister Geraldine is enjoying her retirement at Mercy Retirement & Care Center (MRCC) in Oakland, Calif., where she has adopted a family of feral cats on the campus. She feeds and cares for them daily. As staff members make their way across the campus, Sister Geraldine enjoys observing the connection between the cats and the people, the mutual exchange of appreciation of God’s four-footed creatures, and being in a natural setting that renews everyone’s spirit.

Reflecting on her 70 years in religious life, Sister Geraldine says, "I have always appreciated the wonderful Sisters that I've gotten to know. We have been through all the good and hard times together. I am very grateful."