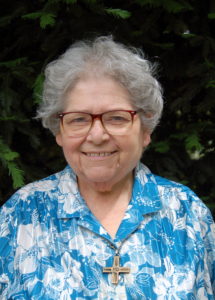 Sister Nena Fazio grew up in East Palo Alto as the eldest of four siblings. Her father owned the only grocery store in the community and, later, the only dime store in town.

Sister's desire to enter religious life was sparked when she watched the film The Bells of St. Mary's and she decided that she wanted to be whatever Sr. Benedict was. Her commitment never flagged. She even learned how to play the theme song to the movie on the accordian!

Nena pleaded with her parents to let her attend a Catholic high school, and her eighth grade graduation gift from them was a year at Notre Dame High School, Belmont. She loved the school, and was committed to becoming a Sister, but her mother was reluctant to let her continue past the first year.

Undeterred, Nena called her father from school during a lunch break, and proposed a deal: by working at the family store after school and on Saturdays, she would earn enough money to cover tuition, transportation and books at NDHSB; he agreed.

After graduating she entered the Novitiate in Saratoga. Sister Nena began her ministry teaching with little ones in Marysville, Calif., then Chico, Watsonville, Salinas and Santa Barbara. She took each child into her heart with acceptance, humor and love. Beginning in 1970, she began working as a pastoral associate, and spent a total of nine years in Paradise, Gridley, Oroville, Redwood City, and Stockton.

Later, Sister Nena served as childcare consultant in the Redwood City area, where she founded the Bethsaida Family Living Home to care for homeless, abused and immigrant women and children as they were becoming self-sufficient. She also worked for years in community services on the San Francisco Bay Peninsula.

For some time, Sister Nena lived in Belmont on the NDNU campus where she has enjoyed cooking and tending the community garden. That garden became part of student orientation programs, and has been used in ecology classes. Sister is now part of the Province Center community.

She has assisted at the Sister Dorothy Stang Center, where Jim McGarry, former director of the Center, valued her “warm and welcoming participation in its activities. She attended luncheon roundtables, prayer services, and special events, and helped students personally to connect with the legacy of Notre Dame and of Sr. Dorothy." Students appreciate her faithful attendance at the NDNU Saturday night Mass.

Throughout her many years of service, Sister Nena has been present to all—children especially—as well as to parents, homeless families, and college students. She exemplifies belief in Jesus’ promise: “… whoever receives one child in my Name receives me." (Mt. 18:4-5)

As  Sister Nena prepared for her 60th Jubilee, in 2017, she expressed her gratitude to her large, extended, Italian family and to Pope Francis. Our SNDdeN family is most thankful for Sister Nena, who has so faithfully shared her many gifts with us.