Jesus went to the Mount of Olives. But early in the morning he arrived again in the temple area, and all the people started coming to him, and he sat down and taught them.

Then the scribes and the Pharisees brought a woman who had been caught in adultery and made her stand in the middle. They said to him, “Teacher, this woman was caught in the very act of committing adultery. Now in the law, Moses commanded us to stone such women. So what do you say?” They said this to test him, so that they could have some charge to bring against him.

Jesus bent down and began to write on the ground with his finger. But when they continued asking him, he straightened up and said to them, “Let the one among you who is without sin be the first to throw a stone at her.” Again he bent down and wrote on the ground. And in response, they went away one by one, beginning with the elders. So he was left alone with the woman before him. Then Jesus straightened up and said to her, “Woman, where are they? Has no one condemned you?” She replied, “No one, sir.” Then Jesus said, “Neither do I condemn you. Go, and from now on do not sin any more.”

This bit of John’s Gospel raises several questions. Who is this woman? Where did she come from? With whom was she? How did the Pharisees and Scribes find her? Why is she so silent? Is she really as passive as she seems? Did Jesus know her? Did he know about her?

As long as the Pharisees and the Scribes are on the scene, she is an object: dragged into the Temple, accused before everyone and exposed as a challenge thrown to Jesus to judge her according to the Judaic law. The scene is brutally violent.

All of a sudden, the energy of the scene changes. Jesus ignores the whole lot of them, and starts writing on the ground. When he stands up for the second time, he has a statement to make: “Whoever is blameless, has no sin, throw the first stone.” He goes back to the marks in the dirt.

Once Jesus is alone with the woman, he addresses her. Right there you have a transgression of the law. Men and women who were not married could not speak to each other. Jesus persists and asks the woman, where everyone went. “Did no one condemn you?” she replies “No.” And the scene ends: “neither do I condemn you. Go and sin no more.”

The Pharisees and Scribes brought the woman to be judged, and to judge Jesus. Would he apply the law? They wanted to trap him. It was a case of sanctioned feminicide. The woman is given no time or space to defend herself. With a few gestures, silence and a single question, Jesus turns the judgment around to the accusers and judgers.

The one word the woman speaks in this Gospel is: no. NO. This one little word sums up this whole Gospel: No to laws that condemn to death because you are a woman. No to accusations meant to berate, belittle, trap, condemn, humiliate and dehumanize. No to feminicide institutionalized, and thus No to any feminicide. No to objectifying and oppression of women.

In the end the Pharisees and Scribes were gathering the data they wanted to be able to condemn and eliminate Jesus, to keep their structures of power and privilege in place. Were they successful? 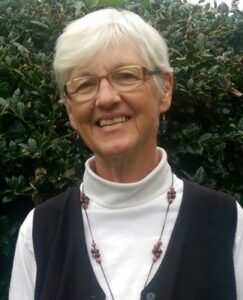 Katy Webster (known as Kátia in Brazil) entered Notre Dame at Ilchester, Maryland in 1976. After initial formation in the Baltimore-Washington area, Katy was missioned to Brooklyn, New York. She taught sixth graders for nearly 5 years at St. Catherine of Genoa School. In February, 1984 Katy was sent to Brazil by the Sisters of Notre Dame de Namur, with the blessings of students and teachers of St. Catherine’s. Kátia lived in Maranhão for 9 years. Then in 1993, she moved to Pará where she has lived at Centro Nazaré on the Transamazon Highway, Altamira, Anapu and Itaituba. Kátia is currently back in Anapu. Kátia has lived with and among the people who struggle to live community while facing the greed of ranchers, loggers and lately the mining companies, and always learning far more than teaching. It is a blessed journey of faith and trust in the good God.