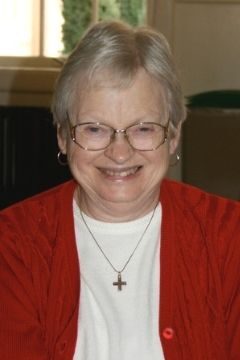 “Well, she was such a joyful woman.” That’s how Sister Joan Maritz responded to the question of who influenced her to become a Sister of Notre Dame de Namur. The woman she refers to is her former Notre Dame High School, Alameda, chorale director. “Sister Emelia was always ready to laugh, she loved music, and she understood young women,” shares Sister Joan. As a teenager, Joan wasn’t the most confident, but that didn’t stop Sister Emelia from nudging her forward. “In a chorale performance, she asked ME to be the Statue of Liberty, to hold the torch, and not to worry because the Statue of Liberty wouldn’t sing,” says Sister Joan.

Sister Joan began teaching school at St. Clare School in Santa Clara, Calif. in 1955, under the good stewardship of Sister Francis Julie. She was delighted that her first sixth grade classroom consisted of “mild” students. Although she never wanted to be too far away from home, she was assigned to schools In Santa Barbara (Dolores School and Notre Dame School) and Portland, Oregon (St. Stephen School) as well as Notre Dame Schools in Yuba City and Marysville, Calif.

She speaks of teaching as “bringing out what’s inside the kids,” and she smiles when she recalls a particular sixth grade from later in her ministry. In the late 1990s, she taught in the math program at Elizabeth Seton School in Palo Alto, California.  She used to tell her class, “you are the best sixth grade in the school,” to which they would reply, “Sister, we are the ONLY sixth grade class in the school.”  Sister Joan remarks that if you tell students how good they are, they live up to it.

Sister Joan has been devoted to her community, and in her retirement, was dedicated in her work at the Sisters' Province Center, where she assisted in the Finance and Development offices by coordinating healthcare insurance and writing cards to friends and families who use the memorial tribute program. Co-worker Chenna Bonequi shared, “When it comes to working with government benefits programs, Sister Joan can be counted on to have insight on tricky issues. She is so generous with her time and depth of knowledge.”

Of her six-plus decades as a Sister of Notre Dame de Namur, Sister Joan says, “I’m very grateful for them; I’m very blessed to live this life.”  Again, she describes the impact of her chorale teacher, Sister Emelia, “She was not only caring and happy, gentle…and full of energy…always ready to laugh. There was a degree of holiness about her.”

Sister Joan’s own warm and delicate laugh and joy is beautifully evident today as she continues to hold the Notre Dame de Namur torch handed to her decades ago.