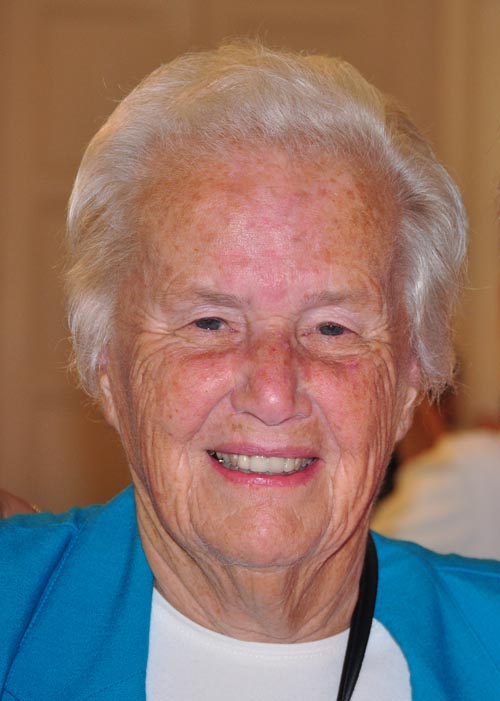 Sister Joanne Miller remembers being an eighth grader at Ascension School in Los Angeles when her teacher, Sr. Mary Joan, a Sister of St. Joseph of Carondolet, invited her and another girl to a clothing ceremony at the St. Joseph Motherhouse. Sr. Joanne recalls, “It was a pretty impressive ceremony in those days with so many young postulants dressed as brides, then, during the ceremony leaving the chapel to return in those awesome black habits and the white veils of novices.”

When the Miller family moved north to Santa Clara, Joanne’s parents enrolled her at Notre Dame High School in San Jose. As was the custom, her senior class went to the novitiate in Saratoga for a picnic. At the end of the day, Sr. Mary Emmanuel asked her: “How was that for you?” Joanne went on about the food and all the fun talking with the novices until Sister interrupted and asked again, “I mean, how was it for you?” Sr. Joanne says, “Sr. Mary Emmanuel saw something in me that I couldn’t see yet. It was as if they were planting a seed and it needed time to grow. Something was nudging me, and the influence of these Sisters gradually made it clear.” 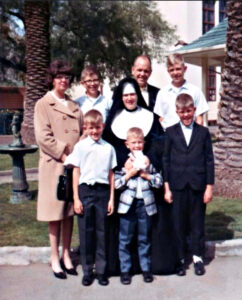 Sr. Joanne looks back and sees how, over the years, she has often felt the gentle nudge of the Spirit. She enjoyed many years as a teacher and administrator in Notre Dame elementary schools from Los Angeles to Seattle to Honolulu. She especially enjoyed teaching the boys at Mission Dolores School in San Francisco. “That experience surely,” she claims, “taught me how to teach!” She also served as parish secretary at St. Francis Xavier in Seaside, CA, and as executive secretary for the California Province, before returning to elementary education as principal of Notre Dame School, Santa Barbara, and later to teach at Our Lady of Mt. Carmel also in Santa Barbara. For a number of years she also served on the staff of La Casa de Maria, a retreat center in Santa Barbara.

The seed planted years ago continues to grow, so much so that Sr. Joanne sometimes feels as if she’s all the way out on the branch of a very tall tree! Sr. Joanne hopes for a time when the church is truly welcoming of all people – the immigrant workers in Carpinteria’s flower fields and nurseries, her gay nephews, and women who yearn for greater equality in the church. “There have been few dramatic moments in my life,” she says, “just this gradual pathway that now calls me to be of support to so many people.”

Sr. Suzanne Dunn, SFCC, who lived in community with Joanne for many years, treasured her quiet ways and her wonderful sense of balance between work and play. She loved it when Sr. Joanne would invite her to put work aside to play cards, go for a swim or watch a Lakers’ game on TV. Other friends appreciated Joanne’s courage to follow her convictions and her faithfulness to the spirit of St. Julie.

What Sr. Joanne said at her 60th Jubilee is still true: “I am grateful for the many blessings, the nudges and surprises I have received as a Sister of Notre Dame de Namur. I am also grateful for the wonderful women who have journeyed with me and helped me stretch and grow. And last, but not least, I cherish the love and support I have always received from my family.”

In 2016, Sr. Joanne moved to Mercy Retirement and Care Center (MRCC) in Oakland, where she meets every day with friends, sharing her sense of humor, love of jigsaw puzzles and Rummikub. Her “regular table” is in the center of the activities room, where she shares her joyful spirit with all who stop by. Sr. Sharon Joyer, the Pastoral Care Coordinator at MRCC, notes enthusiastically that Sr. Joanne adds a refreshing element to the larger community there, just as she has always done with the Notre Dame de Namur community.