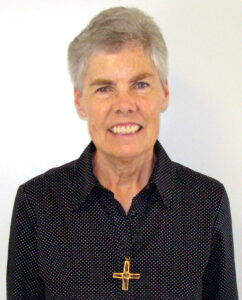 Glory to God, whose power, working in us, can do infinitely more than we can ask or imagine. – Ephesians: 3:20

During her Freshman year in high school Sister Judy began thinking about becoming a sister. Her faith had been richly nourished by her parents and her education. She attended Notre Dame Elementary and High School in Mission Dolores Parish, San Francisco. She still remembers Sr. Teresa Ann Leahy, her sixth grade teacher, saying something directly out of the catechism, but the way she said it made a lasting, deep impression on her: “At Mass, Jesus offers himself to his Father, who accepts the offering and returns Jesus to us in Holy Communion.” As a high school Senior Judy knew that she would enter the convent and in August, 1960, she became a postulant with the Sisters of Notre Dame de Namur.

Sr. Judy’s first years in ministry were somewhat challenging, but gave her good experience. Over a period of eight years she taught seven different grades in six different places: Grades 2 through high school sophomores; and in Santa Barbara, Seattle, San Francisco, Saratoga, Carmel, and Salinas. Then for four years she directed a religious education program at St. Joseph’s Parish in Marysville, and for the following four years she taught junior high students at Holy Family School in Honolulu.

Given a sabbatical year, she spent part of it at a Maryknoll language school in Bolivia and then with Sisters of Notre Dame in Tupac, Peru. The experience of living at Tupac was profound for her. Tupac is a shanty town on the outskirts of Lima. The people living there—mostly families with children—had been driven from their homeland by terrorists. At their previous homes, they were able to grow food, but Tupac had no place to grow food. The ground was sand, and the people had almost nothing. In many cases, their homes were shacks of cardboard or tin. When they first moved there, they devised ways to help each other for survival. When Sr. Judy was there, the town had been established for about 15 years. Things were getting better. Some people had jobs outside of Tupac, took a bus to work, and were able to earn money. Vendors selling produce came to the town. Children received education at a Fe y Alegria School established by the Jesuits and administered by Sr. Liane Delsuc, SNDdeN. Even with the improvements, Sister Judy had never seen such poverty.

Returning to Los Angeles, Sr. Judy was looking forward to being a principal again, and hoping there was a position available at a school that served students in poverty. When she inquired about this at the Archdiocesan office, she was directed to Ascension School. She served as the Principal at Ascension for six years and had an experience similar to her experience at St. Columbkille’s.

Close to Ascension and St. Columbkille Schools was Nativity School. The Northridge earthquake in 1994 rendered the Nativity School building unusable. The pastor asked Sr. Judy to be Principal at Nativity, where she remained for 13 years. With the support of the Shea Foundation, the Archdiocese, many donors, the clergy, and dedicated parishioners and families, the school campus grew to include a prekindergarten to 3rd grade school building, a children’s playground, a computer lab for younger students, classrooms and a playground for 4th to 8th grade students, a computer lab and library for older students, a science lab, offices and a faculty lounge.

Sister considers her years of being a principal in Los Angeles to be a blessing. She knows that the students at the three schools received preparation and opportunities to go to Catholic high schools, graduate and go to college—opportunities which sadly are otherwise lacking in the neighborhoods where the schools are located.

Sister retired in June, 2012. Then, during a six-month sabbatical, she learned that Notre Dame School in Santa Barbara (NDS), a school which had been staffed by the Sisters of Notre Dame (and the last existing Catholic school among the original four Catholic schools in Santa Barbara), did not have a principal. So in January, 2013, Sister Judy became the Principal. Although moving to peaceful Santa Barbara after her many years in South Los Angeles was a bit of an adjustment, she received an amazing welcome by the many people thrilled that an SNDdeN was back, and she felt at home immediately.

She soon realized that among the families at NDS there were realities shared with families in South Los Angeles:
• their reverence for God
• their respect for each other,
• the way they helped each other when possible,
• their commitment to Notre Dame School,
• their income level and
• their ethic for hard work.

Foundations and donors helped to improve the educational program. The Shea Foundation upgraded the school building and generous donors upgraded curriculum resources and provided new technology. The scholarship fund increased. Sister appreciated the dedicated faculty, two of whom were Notre Dame Associates. She realized that at NDS, St. Julie’s vision of educating those living in poverty was alive and well.

Sister retired a second time in June, 2016. Since then, she has spent a year as a member of the Notre Dame Formation Community in Ohio. Living in Ohio provided the wonderful opportunity for Judy to meet many sisters whom she would otherwise not have known. She has also been able to join other Sisters of Notre Dame helping immigrants at shelters in Dilley, San Diego, Phoenix, and McAllen, USA, and in Nogales and Tijuana, Mexico.

Looking back on her 60 years as a Sister of Notre Dame de Namur, Sister Judy is grateful to God for the wonderful life that she has had. She reflects, “Glory to God, whose power, working in us, can do infinitely more than we can ask or imagine.” Ephesians: 3:20