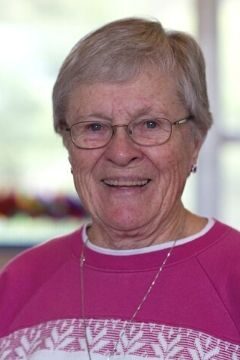 "Growing up, the idea of becoming a Sister was in my head…and I FOUGHT it!" Julie Marie says with a smile. After high school she enrolled in San Jose State University and thoroughly enjoyed college life, but the "Sister idea" just wouldn't go away. After she graduated, she entered the convent on the hottest day of the year, donned a black wool habit and thought, "I'm here and I'm staying."

And stay she did!

For the first 10 years she happily taught elementary school classes, including five years at Notre Dame School in Belmont, then a College of Notre Dame demonstration school. In 1964 she became principal for the first time at Notre Dame Elementary School in Chico.  She loved the experience and the families and remembers that sometimes tuition was paid in produce! She also enjoyed five years as the Director of Postulants and later served as principal at Notre Dame Elementary School in San Francisco for nine years and found it a great way to fulfill a call to work with the poor.

Indeed the disadvantaged have always had a place in Sister Julie Marie's heart and during a period of discernment this concern led her further afield. For eight years this Californian Sister (who has a fondness for warm, sunny weather) called Alaska home. Five of those years were spent living in remote Hooper Bay. There she trained Eucharistic ministers, assisted deacons in funerals and baptisms, provided counsel and served in a thousand different ways, including being a "first responder" after suicides and accidents. This season with the Yup'ik Eskimos, surviving in the harsh climate and living without running water, was a life-changing experience in many ways. "God's presence was very real in those beautiful people," Sister shares.  (She also highly recommends moose meat!)

When health issues forced Sister to return to the lower 48 to be closer to medical care, she joined the staff at the Notre Dame House of Prayer in Carmel, Calif., helping others on their path to spiritual renewal. During this time she also worked at an after-school program in Pajaro for children of field workers and taught English as a second language to parents.

Sister Julie Marie is now retired, calls living at the Province Center in Belmont, Calif. "a gift" and is thankful for the "idea that wouldn't go away."