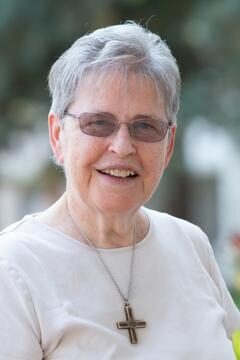 Karen Pozniak’s journey of faith began at Sunday school, memorizing Bible passages and songs at the Baptist church in Lynn, Massachusetts, the faith of her mother. When she was nine, her family moved to California, and several years later, she and her mother were baptized at St. Lucy Catholic Church in Campbell, California.

Karen continued her journey at Notre Dame High School in San Jose. In March of her senior year, the new principal Sister Mary Emmanuel, thought Karen was another girl and asked if she had ever considered becoming a Sister. Though the question wasn’t intended for Karen, she began a discernment process. On August 14, 1960, the birthday of her grandfather, “another influence on her faith journey,” she entered the convent.

After the novitiate in Saratoga, Karen, now Sister Evelyn Marie, continued her studies at College of Notre Dame in Belmont (now Notre Dame de Namur University), where she earned her lifetime teaching certificate. She first taught primary grade children in Watsonville, Calif. and later, in Portland, Oregon. At Star of the Sea Parish in Hawaii, she became involved in the Charismatic Movement, teaching and healing ministry, and learned new ways to pray. She prepared children for the sacraments and assisted parents in their own faith development. As a result of these experiences, Karen was eager to learn more about how to help adults grow spiritually. So, for the next three summers she studied at Gonzaga University receiving her Masters in Spirituality.

At this time, she made a 30-day retreat at El Retiro Jesuit Retreat House in Los Altos, Calfornia—a place especially meaningful for Karen because it was where her grandfather had met the Jesuits years before, a time that brought him and, subsequently, her whole family to the faith.

When she became part of the ministry team at St. Julie Parish in San Jose, California, pastor Father Matthew Sullivan recognized her gifts for religious education and for training those who were bringing communion to patients at Santa Teresa Hospital. Father Sullivan encouraged her to share her effective program with other parishes through the Diocesan TV network. After five years in that parish, Sister Karen had found her calling to chaplaincy. She spent the summer completing a unit of Clinical Pastoral Education at St. Mary Hospital in San Francisco. Then her service as a chaplain was needed at St. Mary Hospital in Reno, Nevada for one year, during which time she worked for and received recognition as a certified chaplain. The community then asked her to be the community coordinator at Notre Dame Villa Infirmary. Recognizing her sensitivity to the sick and dying, one of the Sisters there said, “I hope Karen is here when I die.”

Sister Karen’s next assignment was to the people of St. Joseph of Cupertino, in Cupertino, Calif. where she worked with the Liturgy committee and trained Eucharistic ministers for homebound and nursing home care. A special memory here was being able to support parishioners in offering a very meaningful celebration for the feast of Our Lady of Guadalupe each year.

Wanting to be closer to her mother who was alone in Vermont  following Karen's father's death, Sister Karen applied for a position at Fanny Allen Hospital, the only Catholic hospital in Vermont. This small hospital eventually joined with the Medical Center of Vermont to become the University of Vermont Medical Center. Doctoral and nursing candidates received their clinical training at this location and Karen trained and supported the many volunteers who helped the chaplains in the Spiritual Care Department. She also served the hospital’s patients, staff and families. During this time, Sister Karen joined the Colchester Community Chorus and enjoyed being part of this musical community.

One of Karen’s friends, Jeannie M. Slauson, says of Karen that: “Her intrinsic sense of joy is contagious and comes from being content with all things. I will be forever grateful to her for introducing me to Healing Touch, a gift that has the effect of exponentially imparting God’s grace. Her keen sense of humor seems effortless and serves as a continual catalyst in mitigating anxiety to those she interacts with. I have seen this with patients at the hospital, as well as with her mother. Sister Karen is truly a remarkable mentor and spiritual guide.”