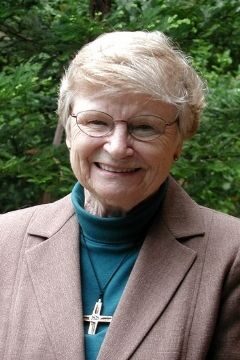 Educated by Sisters from an early age, Katherine dreamt of becoming a Sister herself one day. By high school, the dream faded and she got caught up in studies, clothes and boys! But a still, small voice pierced her conscience. "Becoming a Sister was something I felt I HAD to do," she remembers. She entered the novitiate in 1950.

From 1966-1971, Sister served as the principal at St. Charles School in San Carlos, California, and particularly enjoyed working with a dedicated faculty and with parents in the sacramental preparation of their children.

After completing a master's degree in applied theology, her focus shifted for the next two decades to religious education. For six years during this time she served as a religious education consultant, then Director of Religious Education for the Diocese of Sacramento working in catechist and lay ministry formation. Though it's been decades since that work, Sister's recollections of it remain keen. "I loved that job. We had a great staff and wonderful, supportive Bishop, providing opportunities to visit parishioners all over northern California."

In 1992 she became a certified E.S.L. teacher and began teaching some of the most hard-working students of her career. "They came from all over the globe and were so motivated to learn English." One day she ran into a former student in a grocery store. The woman, originally from Bosnia, came to Sister Katherine's class with no English skills. Today the woman has her own accounting business and credits Sister with laying the foundation of her success.

Recently retired, Sister Katherine serves as a substitute E.S.L. teacher and is mentoring a woman who is exploring the possibility of becoming a Sister. Sister Katherine is also enjoying more time for prayer, reading, walking, and visiting with friends and family.