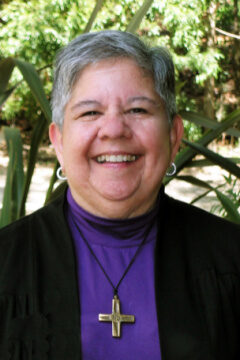 "To everything there is a season, and a time to every purpose under the heavens." These words from Ecclesiastes hold significance for Kathryn Camacho because her journey to become Sister Kathryn Camacho, SNDdeN, did not follow the traditional roadmap. It was a decision that needed its own time.

Born and raised in Sacramento, California, Kathryn felt the calling to join the Sisters after graduating from St. Francis High School in 1972.  However Kathy was encouraged to wait until after college before entering the convent. After college, Kathy entered a management program at Weinstock's Department Stores in Sacramento, but she found herself confronting the values of the corporate world and realizing it wasn't for her. Kathy volunteered at a non-profit homeless shelter, and again felt the strong call to serve with a group of women who had the same call. In her 30s, Kathy made her first vows as a Sister of Notre Dame de Namur.

After serving in parish ministry in Sacramento and as development director for Mission Dolores School in San Francisco, Sister Kathy was named principal of St. Paul of the Shipwreck School in San Francisco. In this role she was instrumental in turning the school around financially. Later she became the founding principal of Cristo Rey High School in Sacramento, where her administrative acumen, diplomacy, initiative and compassion helped form a vibrant school. Her work was hailed as fundamental to Cristo Rey's success, but perhaps more importantly to some, as one colleague shared, "Sister Kathy demonstrated through her work that God is good and that each person is sacred."

Sister Kathy has also worked with college students at the Newman Catholic Community at California State University in Sacramento. She assisted them in areas of student ministry training and wedding preparation, among other things. Some of the students had never before seen a woman religious and Sister Kathy loved getting a "wow" response from college students who, through her, were exposed to the good works of the Sisters of Notre Dame de Namur. "Her work," as one colleague puts it, "helped students grow in their faith by listening to their stories and being present. Sister Kathy provided our bursting-at-the-seams community with a solid pastoral presence, guidance, hope, love and understanding."

Sister Kathy has also served as a National Formation Minister for the Sisters of Notre Dame de Namur.  She saw the appointment as an exciting opportunity to be part of the future of Notre Dame.

For several years she served as Principal of St. Paul's School in San Francisco (another St. Paul's!), and is now Assistant for Enrollment at Notre Dame Elementary School, Belmont, Cal.

Sister Kathy Camacho's commitment to a life of service as a Sister of Notre Dame de Namur has been guided by a resilient faith that her mother instilled in her. Barbara Camacho lived through the Blitz in London and possessed an unwavering faith that God was good and to trust in Him.  She taught Kathy that, in the darkest moments, God is there.  "If I can't see, it's because I can't see, not because He's not there."  A mother's faith—that of both Barbara Camacho and Mere Julie [St. Julie Billiart]−has led Sr. Kathy through all the transitions and challenges of her life. In spite of any circumstances, she still trusts that there is "a time to every purpose under heaven."