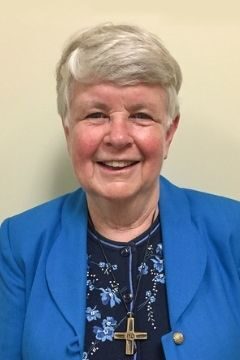 Sister Elisabeth Tiernan grew up in a lively Irish Catholic family of seven children, whose dinner conversations often took the form of debate on political questions of the day, with her father acting as referee. Thus began a lifelong interest for Liz in politics as essential to the moral life of Christians.

Growing up a few blocks from St. Clare's elementary school in Santa Clara, California, Liz was a reluctant student in the beginning. As her eldest sister Barbara writes, "At the age of six, Liz refused to budge from home to walk the few short blocks to St. Clare's on the first day of school. But after Mom's adamant refusal to give in, Celeste, her younger sister (not yet ready for school herself) took her hand and propelled the reluctant Liz to the first grade.”

It was there, at St. Clare's School and later at Notre Dame High School in San Jose, that Liz began a deep respect and love for the Sisters of Notre Dame de Namur. So it was with great delight and with the encouragement of her parents and siblings that in 1961 she began her wonderful journey with the sisters she had liked and admired so much, from elementary through high school.

In spite of her "rocky start" with education, Liz has loved teaching. In 1985, she combined this love with a desire to encourage faculties in their quest to pass on the Good News of Jesus by creating a program for Catholic schools called "Celebrate the Presence of God". For two weeks at a time, Liz would go into elementary schools and teach every class, K-8, for five days, thus providing in-service in their own classrooms for teachers, helping them to see that religion lessons can be creative and inspiring.

Through the years, Liz has taught all age groups, was an elementary school principal and a high school Dean of Students and continues to present the Goodness of God at retreats and reflection days for students and adults in the state of Washington.

An added privilege and love has been her opportunity to walk with Catholic Native American communities in Seattle and to be a presenter of catechesis at the National Tekakwitha Conference held yearly across the United States. She has also written two workbooks for Native Catholics to help them teach the truths of Catholicism through their own cultural symbols. These books are called: "Keepers of the Fire": Catholic and Native Teachings and Spirituality, Passing on the Traditions, and were published by the Archdiocese of Seattle.

And now, sixty years later, she is most grateful for the opportunity, through the Sisters of Notre Dame de Namur, to deepen her friendship with her loving God and become more and more conscious of responding to the social justice teachings of the Catholic Church, especially in the areas of racism and climate change. She has been inspired and uplifted by the practical, down-to-earth wisdom and inspiration of the beautiful women in this international congregation with whom she has "shared the most wonderful, faith-filled life possible."

"My greatest desire, at this stage of my life,” says Sister Liz, “is to continue, with joy and delight, to try to live the Gospel of Jesus in the spirit of St. Julie and Francoise, inspired by the Sisters of Notre Dame de Namur, who have given me so much."