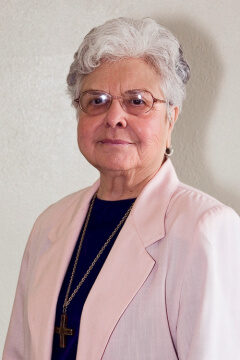 Simona Holguin was born into a close Mexican Catholic family with two brothers and a much-loved sister named Lucy. She first came to know the Sisters in Santa Barbara when the Holguin children transferred to Dolores School, where Simona was impressed with the way the Sisters interacted with one another and with the students. She decided early on that life as a Sister of Notre Dame de Namur was the life for her. Entering the novitiate in 1946, she later chose the name Lucy in honor of her sister.

There was no question about Sister Lucy’s preference in teaching; she had a natural rapport with children in the first and second grades. Her class in Los Angeles had exactly 30 girls and 30 boys! “We were always reassured that God gave us the grace of the ‘charge’—we hoped!” said Sister Lucy.

She taught in 12 schools along the West Coast and Hawaii, with longer assignments in Alameda, Chico, and in Campbell) and at Star of the Sea School in Honolulu. She completed a Master’s Degree in Administration and Supervision from the University of San Francisco, then served as Principal and Superior of some of the schools where she was assigned.

The Vatican II Council initiated the renewal process for women’s religious congregations, and Sisters and one of the welcomed changes was that Sisters were able to visit their families. Sister Lucy was asked to accompany one of the Sisters on a home visit to Mexico City. She was delighted, and was able to invite her sister Lucy to make the trip with them. To Sister Lucy’s joy, her sister later joined the Notre Dame Associates, a group of lay women who live the charism and spirituality of St. Julie.

When Sister Lucy returned to Santa Barbara in the 1980’s and 90’s, she enjoyed serving as Principal, then Director of Religious Education in her home parish of Our Lady of Sorrows. Among other blessings, Sister counts her participation in a program of spiritual renewal in Rome for SNDdeNs from all parts of the Notre Dame world, which she attended with California Sister Yvonne Bondi, SNDdeN. There she met and experienced the reach of Notre Dame de Namur on five continents.

Since 2010, Sister has been living at Mercy Retirement & Care Center (MRCC) in Oakland, Calif. She was surprised recently by a visit from some of her former first graders at St. Philip Neri School in Alameda. It was one of her favorite classes in one of her favorite missions. She also enjoys visits from former students from Chico, another place where she made lasting friendships. It's no surprise that her engaging sense of fun and humorous stories continue to draw people to her.

Sister Sharon Joyer, who lived with Sr. Lucy during their early days as SNDdeNs and who currently works as part of Sister Lucy’s care team at MRCC, offered the following: “The word I use for Lucy is hospitable. She has a way of welcoming you into her space and having a delightful conversation. I always appreciate her warm and welcoming spirit.”

As Sister Lucy reflects on what more than seven decades in Notre Dame means to her, she spoke of the unconditional acceptance she felt from the start. She is grateful for her fine education and the many opportunities she has been given for enrichment along the way. Above all, she is grateful to a loving God for her 75 years as a Sister of Notre Dame de Namur. In the words of our blessed foundress, St. Julie Billiart, “How Good is the Good God!”