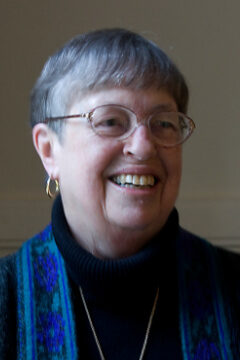 Heart and soul — an artist! Sister Margaret designed the beautiful, very real-looking Madonna and Child on the bell tower of Cunningham Memorial Chapel at Notre Dame de Namur University in Belmont, and she collaborated with artist Gabriel Loire, in designing the sculptured-glass chapel windows. To remember Sister Margaret Hoffman is to see her as a gifted artist and a well-loved teacher, a woman of great empathy, a faithful friend, and an indefatigable champion for issues of peace and justice. She struggled to learn computer programs even in her 80’s so she could both keep up with issues across the country and around the world, inform others, and contribute reflective insights about them. She could also laugh at herself, and often did, making others laugh with her.

Sister Margaret served as Chair of the Art Department at College of Notre Dame for twenty years. She also inspired and influenced many future teachers while giving art classes to young Sisters at the Saratoga Novitiate. She touched the lives of students at Emmanuel College in Boston, where she was assigned for a year, then taught art for twelve years at Notre Dame High School in San Jose, still making time to do art therapy in convalescent homes for the elderly and mentally ill who had little access to the arts.

Sister Margaret then served for five years at the Sisters’ Mission Education Center in Washington D.C., researching issues and communicating on behalf of Notre Dame Sisters around the world. After returning to California, Sister Margaret became the Communications Director for the California Province, publishing a newsletter and expanding community awareness of justice and peace issues. Sisters and visitors to the Notre Dame Province Center in Belmont will continue to see in the entryway to the Province Center her more recent artwork which combines quotes from the Beatitudes with ones from Sister Dorothy Stang, who was assassinated in the Amazon Rainforest.

The Sisters are grateful to healthcare coordinators Ann Comer and Sister Sharon Joyer, SNDdeN, and to Mercy Retirement & Care Center in Oakland, where Margaret received excellent care the past several months before she died peacefully on March 29, 2021. She will be deeply missed by her many friends, former colleagues and students, by her brother, James Hoffman, his wife, Jan, their children Karl, in San Francisco, and Kevin, Jeremy, and Jill in Pennsylvania, by other family in Alabama, and by all her Sisters of Notre Dame de Namur. Another brother, Ray Hoffman and her sister, Patricia Hoffman, SNDdeN predeceased her.

Mass was celebrated for Sister Margaret on Tuesday, April 20,  in the Cunningham Memorial Chapel on the Notre Dame de Namur University Campus. You may click here to watch a video of the funeral.

We will following the Covid-19 health precautions of wearing masks, social distancing and contact tracing. Attendees should allow extra time before the liturgy.

A video recording of the funeral will later be posted on the Sisters' SNDdeN West YouTube channel.

If you would like to make a memorial gift to the Sisters in Sister Margaret's name, please click here. 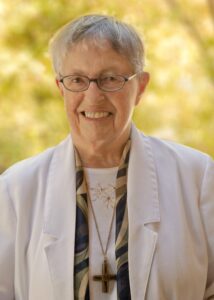 Margaret always knew she wanted to be a Sister. After all, by age 10 she had a personal altar in her closet featuring a large poster of the "Agony in the Garden" that she won in an art competition. She entered the novitiate in 1946, but the transition to convent life wasn’t easy at first for the outspoken young woman. Happily, her younger sister Pat entered a few years later, and Margaret says, “She taught me how to laugh.”

In 1949, when Sister first started teaching elementary grades in Marysville, it quickly became apparent that she wasn’t best suited to teach the little ones. She was soon missioned to College of Notre Dame (now Notre Dame de Namur University) and charged with starting and chairing an art department!  She said, “It was an exciting time; figuring it all out, buying lots of art books." One summer, she took a course in life drawing at UCLA in a huge class where she felt "quite conspicuous" in full habit!  Margaret loved those early College of Notre Dame art classes, and many former students still keep in touch. She treasures these enduring connections.

Sister Margaret's artistic legacy can be seen to this day at Notre Dame de Namur University, where she designed the bell tower on campus and worked closely with the artist who created the stained glass windows in Cunningham Chapel. Her role as the creative arts instructor to the novices and postulants at the Saratoga novitiate influenced them personally and as future teachers. She also touched the lives of students at Emmanuel College in Boston, where she was asked to teach for a year.

After 20 years at the university, she taught art at Notre Dame High School, San Jose, for 12 wonderful years.  At the same time, she did art therapy at convalescent homes for the elderly and mentally ill, who had little access to the arts.

In the early 1980s, Sister Margaret moved across the country to Washington, DC,  to work at the Notre Dame Mission Education Center.  It was here that she became politicized as she witnessed the involvement of SNDdeNs in Nicaragua in Central American conflicts. Two new passions were ignited: one for justice, the other for communications.

When Margaret returned to California in 1987, she assumed responsibility for the California Province newsletter, and initiated the Sisters' entree  to the world of the internet. Some 30 years later, she still works tirelessly to communicate issues of Justice and Peace. On any given day, you might find her teaching a class at NDNU, writing an E-Alert, or calling President Obama about an issue like human trafficking, care of the earth or immigration.  Her work has not gone unnoticed; earlier this year, Sr. Margaret received the 2016 Guardian of Justice Award from the Dorothy Stang Center at NDNU.

Though you might not think that Margaret has any spare time, she continues to express herself through art. She has created a series of artworks that combine quotes from the martyred Sr. Dorothy Stang and the Beatitudes. And she still enjoys reading a good mystery.

Sister Margaret strives to be reflective in the midst of action in these complex times. She looks back on her 70 years as a Sister of Notre Dame with gratitude for her “rich and beautiful” life.  She deeply values the community of St. Julie with its core conviction about the goodness of God.  As one of her favorite hymns says, “Our Good God IS so very good."