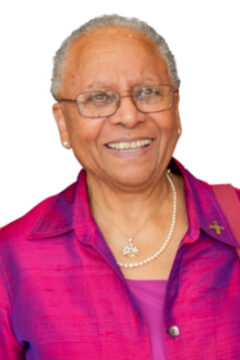 When Irma graduated from Notre Dame High School in Alameda, she knew one thing for certain—she wanted to teach music.  She also liked the Sisters who had taught her and thought that maybe becoming a Sister was a path she should try. Being only 17 years of age at graduation, her father encouraged her to go to college first before making a decision.  Irma went to the College of Notre Dame for her freshman year and then entered the novitiate. As Sister Martin de Porres, she continued  her education earning a bachelor's in music, specializing in voice.

Her dream of teaching music was immediately realized when she was assigned to the music department at Notre Dame High School in Belmont, Cal. When the music department head was unable to return to school for a time, a young Sister Martin was asked to fill her shoes. This surprising opportunity was both thrilling and daunting.

Sister also taught music and a host of other subjects at Sacred Heart School in Salinas and at Notre Dame High Schools in San Jose, Alameda and San Francisco, Cal. After 18 years of teaching she was ready for a change. Sister Martin jumped at the chance to minister in the Hunter's Point parish in San Francisco. Her work included visiting parishioners and tutoring students of all ages. Never one to stray far from music, she also began a Gospel choir for the older teens. Not only did the teens learn about music, they learned responsibility and leadership. Soon the adults wanted their own choir, so Sister started that too.  Both choirs continue to this day!

Beginning in 1998, she served as the Health Care Coordinator for the Sisters of Notre Dame who reside at Mercy Retirement and Care Center in Oakland.  In this role she handled a thousand details for the Sisters: monitoring their day-to-day health, taking them to doctors' appointments and shopping for them.

She also prepared the music for Sunday and seasonal liturgies and funerals at the Center. "It does make my heart glad when the residents tell me that they missed me on the Sunday when I wasn't playing or singing," she says. "I have always considered it a privilege when a Sister, layperson or family member asks me to prepare their funeral…I am so happy to serve in this ministry."

Sister Martin is now retired and has joined the community at Mercy Retirement and Care Center.