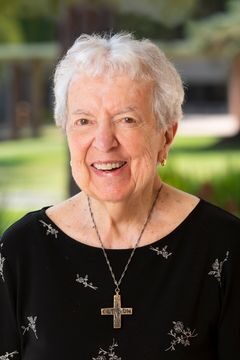 In the late 1940s, the small mining town of Ely, Nevada, had no Catholic schools, and it was only because of a high school acquaintance that young Mary Laxague even heard of the College of Notre Dame (CND) in Belmont, California. She decided to attend the college based on that recommendation and was in the last class to receive associate's degrees in 1951. Mary was quite taken with the Sisters who taught at the College. At that time, they were celebrating the  100th anniversary of their arrival in  California, and Ralston Hall was being readied for the celebration.  "It was amazing," Sister Mary (Mary Bernard) recalls. "What struck me was the sight of the Sisters, in their blue aprons, cleaning the chandeliers in Ralston Hall. A professor was not above doing that kind of work."

Mary entered the Sisters of Notre Dame de Namur later in 1951, and through her early ministries she experienced the changes that occurred, not only in the Church through Vatican Council II, but in American society as well. She earned her master's in business education at San Jose State in 1965, and after 14 years of teaching in Notre Dame elementary and high schools in Watsonville, Marysville, and Seattle, she became a professor at the Business College at CND (now NDNU). Six years into her tenure, she became Dean of Students for the College, a job she truly loved.

In the 1990s, after more than 30 years in teaching and administration at the College, she became a member of the Leadership Team for the California Province. A major part of her responsibility as a team member was to oversee the construction of the Province Center in Belmont, where she now lives. For years, she worked with the Province Finance Office and also served on the Board of Trustees for Notre Dame de Namur University.

Sister Mary takes the time to keep healthy and flexible. She has practiced yoga for 20 years, and walks every day around the NDNU campus, sometimes on the street that bears her name–Laxague Way! An anonymous donor made a gift to the University in her name because Sister Mary "had made a difference in that person's life." She has never known who that person is, or was, and respects the donor's request for privacy. Perhaps that donor saw in Sister Mary what Mary herself saw in those Sisters of Notre Dame working on the chandeliers in Ralston Hall more than 70 years ago: she is a professor, a Sister, not above doing any kind of work, willing to do whatever it takes to make a difference.