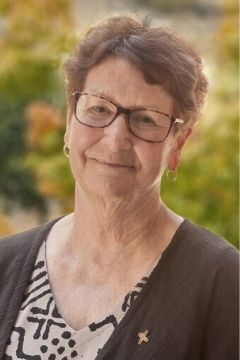 Maureen grew up in Redwood City, California with her devoted Catholic parents and three brothers. Her family was active in Our Lady of Mt. Carmel Church. She attended the parish school staffed by the Sisters of Notre Dame, and Notre Dame High School, Belmont. "I grew up surrounded by our Catholic tradition that was lived out both spiritually and socially," she says. She also remembers summer recreation programs, where she was delighted in the many creative opportunities. These influences likely served as the wellspring for the creativity and spirituality that Sr. Maureen has expressed throughout her life.

Her love for the Sisters of Notre Dame who taught her, and a growing attraction to the gospel were strong motivators for Maureen to enter religious life. The Sisters' expectation of significant positive outcomes from Vatican II, especially for women religious, also drew her.

As a teacher, she served in Millbrae, Santa Barbara and Seattle, where she also earned a master's degree in religious education. A humorous memory from her early days of teaching relates to her time at Dolores School in Santa Barbara, where she also served as the director of the "CCD" program. "Children being children," she says, "on the day of First Communion, the first two out of the pews at the end of Mass began to genuflect to the back doors of the church, and so, all the other children followed suit.  I was up in the sanctuary singing with the “folk group” and was helpless to change this course of events! Things we can laugh about now that weren’t too funny at the time."

The ministry that has meant the most to Maureen was at Most Holy Trinity Parish in San Jose, where she was a teacher, the school's religion coordinator and then, a pastoral associate. Her nine years there opened her to a vibrant, multicultural community and motivated her to learn Spanish, which she acquired through immersion experiences in Mexico. "It was the first time I really formed adult, faith-filled relationships with the people where I served." she remembers.

Sister Maureen was filled with gratitude for another opportunity to serve a diverse multicultural community –this time of young women. The seven years she spent teaching religious studies at Notre Dame High School, San Jose, energized her own faith, as she developed new courses in liturgical leadership and personal spirituality, and planned student retreats.

A significant project she developed at NDSJ was an adaptation of Judy Chicago's "The Dinner Party" art installation. Freshmen at NDSJ continue to participate in "The Women's Place Project." Among the many components of the students' finished projects are creative place settings and toasts celebrating women's lives and accomplishments.Rebecca Gilbreth, NDSJ class of ’01 recalls, “The Women’s Place Project and the study of daily quotes from women of impact in our freshman religion classes taught us, as brand new Notre Dame women, about the importance of women in history and, in turn, about making our own voices heard. Sister Maureen had an amazing way of encouraging students to look within when studying spirituality, finding a connection in a very personal way. She was most certainly one of the very top Women of Impact in my own life.”

Sister Maureen continues to create women's spirituality retreats at the Sisters' House of Prayer in Carmel. Mary Cea, a 25-year attendee of the retreats, considers Sister Maureen to be one of the most influential women in her life. She describes her as exceedingly organized, and a creative teacher who encourages delight, generosity of heart and personal empowerment.

Sister Maureen is gifted in many creative arts, including bookbinding and weaving. Mary Cea commented that "The gifts and talents that God gave her draw others to God, and she uses them well and beautifully!"

At the time of her 50th Jubilee, Sister Maureen reflected that she  grateful "to be able to see that the reason I entered the SNDdeNs comes to life among us every day. Years from now, when religious life has been transformed yet again into a form of life that best meets the needs of the people of God, once again, they too will proclaim that God is indeed good."

We travelers walking toward the sun
can’t see ahead,
but looking back
the very light that blinded us
shows us the way we came,
upon which blessings now appear,
risen, as if from sightlessness to sight
and we by blessing brightly lit
keep walking toward that blessed light
which yet to us is dark.

Click here to give a donation in Sister’s honor.