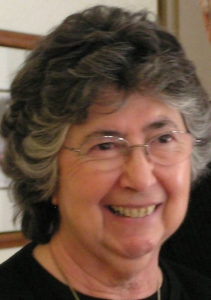 Entering the convent after high school graduation, Rosalie describes her calling as a gentle nudge.  "At that age, what does one know about discernment?" Rosalie asks with a smile. Sixty years later she is ever thankful for that nudge.

Like most Sisters of Notre Dame, Sr. Rosalie became a teacher.  She enjoyed teaching elementary students at Immaculate Heart of Mary (Belmont) St. Dunstan (Millbrae), St. Columbkille (Los Angeles) Saint Philomena (Washington) Notre Dame (Belmont) but was dismayed in 1967 when the provincial superior told her she would be teaching the eighth grade at Junipero Serra School in Carmel while also serving as principal for the school and as superior for the convent.  "I CAN'T do that," Rosalie told her. The superior smiled and replied, "Yes you can!" And Sr. Rosalie did all that for six years in what turned out to be a wonderful assignment. It was also during this post-Vatican II time that the Sisters were allowed to wear "modified habits."  After Easter break many of the Sisters returned to school wearing the modified version which included a shorter veil that revealed their hair. Many of the students had never seen a nun's hair and were astounded. Sr. Rosalie hadn't made the switch yet prompting one little boy to ask her, "How come you didn't get a hat with hair on it like everybody else?"

Sr. Rosalie served three very special years in Rome at the Notre Dame Generalate as a hospitality coordinator for Sisters, many of whom were on sabbatical.  At any given time there would be up to 30 Sisters from 20 countries and a variety of orders. The Generalate building also opened up rooms for a family of Vietnamese refugees.  Her experiences of working with this family, as well as her volunteer work with Ethiopian refugees, stimulated her desire to continue working with refugees. Back in the U.S. she began teaching English to five young Haitian men, focusing on basic vocabulary that would help them get jobs and survive.  She arranged for one to have an interview at a local McDonald's. Though he didn't understand everything asked, the manager hired him based on his enthusiasm.  After the young man started working, Sister confesses she sometimes peeked in on him through the window to see how he was doing.

Some of her most fulfilling years were spent serving at St. Lucy Parish as a pastoral associate.  In this role she saw people at all stages of life and worked one-on-one with them–in both the joyful and most painful moments.

With a dedicated team, Sister coordinated the RCIA Process where adults deepened their relationship with God, learned about the Catholic faith and, if so called, became members of the Church. Accompanying people through this process was an experience to equal none!

She also coordinated a grief support group providing a listening presence to those who had lost loved ones. She brought together a team of women, who had been widowed, to lead workshops on how to manage finances and deal with legal issues. This support enabled women who felt vulnerable to achieve some sense of security at a difficult time in their life.

After 19 years at St. Lucy's she envisioned retiring from full-time ministry.  Instead she accepted a new position as the Bishop's Delegate to Religious in the Diocese of San Jose. In this challenging and fulfilling role she serves as the liaison between the Bishop and the women and men religious serving and living in the diocese. Perhaps she'll retire when her commitment is fulfilled…or maybe not! As Sister shares, "In religious life one never really retires from ministry but transitions into something new!"