Liane Delsuc is still in awe of where her life journey has taken her. She credits her mother for giving her a deep appreciation of creation and care for the earth.  Both she and younger brother Steve went to St. Dunstan School in Millbrae where they heard stories about St. Julie, foundress of the Sisters of Notre Dame. Liane’s favorite story was the concealing of Julie in a hay cart to protect her from the wrath of the mob during the French Revolution.

Before entering the Notre Dame community, Liane had already begun a master’s program in special education at San Francisco State and was teaching in a public elementary school. Sister entered religious life when Vatican II was bringing changes to the Church and to religious life.  Her first assignments were at Mother of Sorrows and St. Columbkille Schools in South Central, Los Angeles. There she helped to establish a non-graded reading program and consulted in local Catholic schools with learning-disabled students. She also established the Julie Billiart Center for junior high students with learning disabilities.

In 1985 Sr. Liane was invited to serve to Peru for a summer.  At the end of the summer she described herself as “hooked,” and her service in Peru turned into a 16-year commitment.  Her fluency in Spanish made her a perfect fit in a community of SNDs already working in a very poor area located near a huge garbage dump. Jesuits were just beginning a Fe y Alegria school in that settlement agreeing to provide the property and money for cement while the parents were to provide the muscle. At one critical point when negotiations were at a stalemate, a delegation of women marched to the meeting, demanding in no uncertain terms that the school be built.  It happened! In Sr. Liane’s first years there, the school building grew brick by brick. In the end the people truly “owned” it!

At first, Sr. Liane taught part-time in the school and worked in the parish catechesis program while helping to build an inter-cultural religious community. She was then asked to be the second principal, a post she held for the next four years. The school began with three first grades and two freshmen high school classes. It grew rapidly from 250 students to 1000 students! 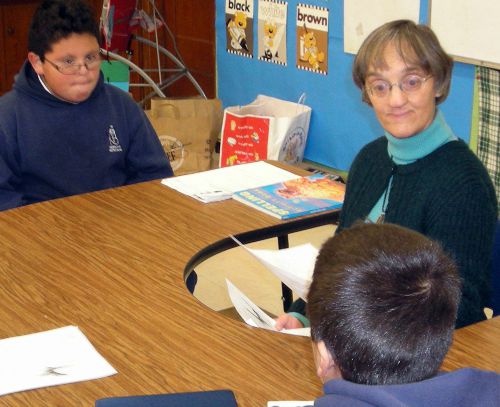 Now back in the U.S., Sr. Liane uses her skills in small group reading, math and English with special education students at Moreland Notre Dame School, Watsonville, and at Mission Dolores, San Francisco. She also co-teaches, translates for parents, and has participated in a bilingual spiritual direction program.

Sr. Liane knows well how to read the signs of the times and the signs for her time. “After these 40 years, I believe that the spiritual journey is about subtraction and surrender. We are called to be in silence, standing in awe before the Great Mysteries of Life and Death, remembering who we are as human beings, blessed with an incredible potential to love.”