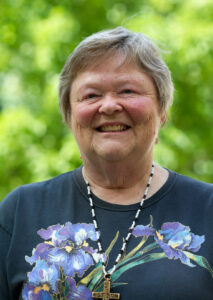 Sister Sharon McMillan was the first woman in the United States to receive both a Licentiate and a Doctorate in Sacred Liturgy from the Pontifical Liturgical Institute in Rome.

Sr. Sharon joined the Sisters of Notre Dame after Vatican II. “I was formed in a pre-Vatican II church,” she says, but the Sisters at Mercy High School presented Vatican II as the most exciting thing, as did the Jesuits at University of Santa Clara. The feeling was, “Let’s go with it.”

And she did! After graduating from the University of Santa Clara, Sharon joined the Jesuit Volunteers and spent two years teaching second grade with Dominican Sisters in Seattle.

During that time, she lived in community with two Dominican Sisters. She had thought of being a Sister before, but a decision never seemed clear. Sharon became a teacher’s aide at Notre Dame Elementary School, Belmont. The next year, she got her credential from College of Notre Dame and taught second grade. The question of entering persisted and, finally, she talked with Sr. Carol Kenning, at that time Notre Dame’s vocation director. Sr. Carol said to her, “You’re 26. You’ll spend your life wondering. Experience it from the inside. See what it is like. Then decide.”  So, after a year in Berkeley at the School of Applied Theology, she decided to enter and see. She sensed that although she was already serving the needy, she wanted to do it in the context of community and prayer. Following her novitiate years, Sr. Sharon continued teaching, but during 12 years of parish work she grew more and more involved in liturgy, both in the parish and diocese.

Her years in Rome were richly blessed. She lived with Sisters of Notre Dame in an international house with Sisters of many cultures. She had the opportunity of teaching core courses in liturgy to 125 women religious from many cultures at Regina Mundi, a religious institute. She knew that the church law allows the local church to celebrate in ways that keep liturgy meaningful for the people who are praying and celebrating. She remembers asking some Sisters from Africa, “For example, the sacred text is blessed during liturgy, so how do you honor something in your culture? They thought, reflected, and one responded, “We would clothe the book in the skin of a female lion.”

Returning from Rome she became the Assistant Professor of Sacred Liturgy at St. Patrick’s Seminary in Menlo Park and later a member of Notre Dame’s Kenyan Province as a guide and teacher of novices who came from throughout Africa. 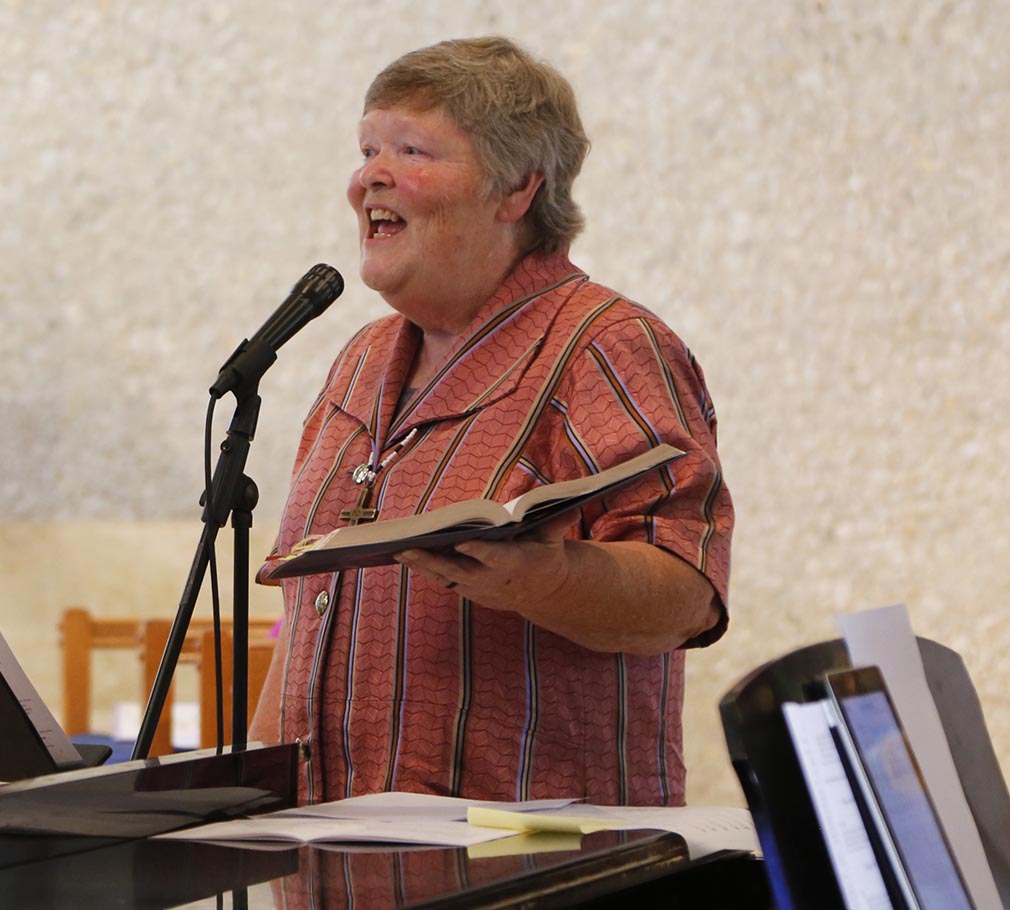 About her work as liturgy coordinator at San Carlos Cathedral in Monterey, she says, “These are the most generous, appreciative, devoted, faithful parishioners. They welcomed me with open arms. They drop everything to help in a liturgical ministry. For the Holy Week/Easter Tridium, two adults, a teen and I were a team coordinating everything. It is so rewarding to be able to work with these generous people.”

This enthusiastic appreciation is mutual. One parishioner and friend, Valerie Moulé says, “She is the absolute best! She makes our liturgies come alive through her creative ideas, and involves parishioners in both planning and execution. She offers exceptional workshops. People are amazed at how much they learn, and how she makes the topic so interesting and understandable. Another special talent is her beautiful singing voice which we always look forward to hearing.”

At this time of her 40th Jubilee Sr. Sharon was especially grateful for the trust that the community has had in her to follow rather unusual paths: to work in liturgy when most were teaching, to study in Rome, to recognize that her gifts would be available to the local churches, to teach in a seminary, helping to form priests and pastors.

In recent past ministries, Sr. Sharon has served  liturgy coordinator at San Carlos Cathedral in Monterey and Assistant Professor of Sacred Liturgy at St. Patrick’s Seminary in Menlo Park. She frequently serves as liturgy coordinator for Notre Dame’s congregational gatherings in California and internationally.

Sr. Sharon lives in Monterey, California, and is thoroughly enjoying her teaching for the Graduate Program in Pastoral Ministries for the local Jesuit University, Santa Clara. She also serves in a variety of liturgical ministries for her Cathedral Parish and for the Dioceses of Monterey and San Jose.