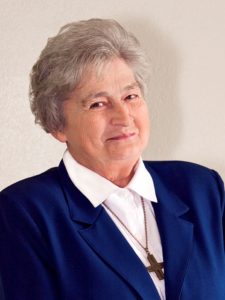 "God is good, always." These words of St. Julie, foundress of the Sisters of Notre Dame de Namur, struck a spark in the heart of fourteen-year-old Dolores Steiner. She first heard them at Moreland Notre Dame Boarding School in Watsonville, California.

Dolores, or Dodi as she is called, and her older sister, Margie, left her parents and brothers Joe and Pat at home in Bakersfield to pursue their educations at Moreland Notre Dame. Dodi remembers that it was Sr. Henrietta who opened the door to her on the day she arrived at the school. Over the years, Sr. Henrietta also opened other doors for Dolores, intriguing her student with stories of St. Julie's faith and love of God.

Dodi’s sister Margie, who later became Sr. Ann Michael, had known from a young age that she wanted to be a Sister, yet Dodi says, “I had no such inclination—at least not immediately!” But throughout high school in Watsonville, the spark struck by St. Julie’s words was fanned into flame for young Dodi, and she determined to be like St. Julie—a woman of courage, one who was not afraid to take risks, and who had compassion for all. Dodi was also impressed that all the Sisters treated each other as equals, with no distinction based on their role at the school.

In February, 1947, Dodi entered the convent to pursue her dream of spending her life to spread the good news of the goodness of God to all she met. For the next 30 years, Sr. Dolores was able to exercise her energy and creative spirit as a teacher of primary grade students in California, Seattle and Hawaii.

For many years, Sr. Dolores was drawn to serve in Alaska. She and Sr. Julia Clayton were given permission to go, and for 10 years they lived and worked among the Yupik and Athabascan native people, as well as a mixed population of Alaskans. Sister says that she has always appreciated being with people of different cultures, and her time in Alaska was rich and fulfilling.

The words of a poem written by a friend about Sr. Dolores capture her time in Alaska:

In return for all the help she gave
They taught her fishing beyond the wave.
In the many hills where things run loose
They showed her how to get a moose.

She taught them how to grow great spuds
They showed her how to make skin duds
Her cabbage at the local fair
Took first prize, it was so rare.
-Max Tremblay

Sr. Dolores was very honored by a special request from an Athabascan family to become part of their traditional Stick Dance, a tribute rarely bestowed on a non-Native person. She was humbled to take part in the week-long celebration honoring the dead, in which she was given clothes to wear in honor of Ethel, a deceased family member who Sr. Dodi had assisted.

Sr. Dolores says, "Although I did not know Ethel well, I did spend much time with her in her last illness. I would visit, sing, pray and bring her the Eucharist." Being invited to participate in the Stick Dance ceremony was a sign of the community’s appreciation for her life and ministry among them. The ceremony was a spiritual experience for Dolores that remains a cherished memory.

Sr. Dolores went on from Alaska to spend many more years in ministry in the ‘lower 48.’ She continually adapted to new opportunities for ministry, even graduating from a three year program to become a Certified Nursing Assistant and began serving at St. Francis Medical Center in Santa Barbara in 1993.

Sister lives at Mercy Retirement and Care Center in Oakland where, in the words of Sr. Sharon Joyer, SNDdeN, the Notre Dame Health Care Assistant at MRCC, "She is still sharing the goodness of God with residents and staff alike."

Throughout the years, Sr. Dolores has enjoyed flower arranging, gardening and other creative pursuits. “She loves to create beautiful decorations for the holidays to cheer up those that are ill or alone,” says Barbara Najera, a longtime Santa Barbara friend who worked with her on many projects. “Sometimes, even when she is not feeling well, she still does all these things to bring joy to others. Sister Dolores is one of the most active, giving ladies that I have ever known. … and truly a woman of great faith."

Today, as Sr. Dolores celebrates 70 years as a Sister of Notre Dame de Namur, we recognize the many ways that she has served others. Like St. Julie, she continues to be a woman of courage, a risk-taker, and one with a compassionate love for all. Dodi, we are glad you heard the call of Jesus and St. Julie and have journeyed with us so faithfully these many years!

Good and gracious God, may you continue to shine in
Dodi's heart and on her life, continuing to fill her with joy, creativity, hope and laughter.

-Prayer for Dodi at her last birthday