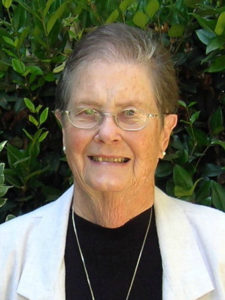 Sister Jeanne (Marguerite) Sullivan loves the rich variety of her 60 years as a Sister of Notre Dame. Just recently, some words of Pope Francis suddenly provided a unifying link for the surprising turns of her life. He wrote, “We are called to form consciences, not to replace them.” This total respect for others along with the ability to guide them, has been the hallmark of her ministry.

Initially, Sr. Jeanne expected to be a teacher. After all, she had graduated from Notre Dame High School, San Jose, then from San Jose State University and was an experienced teacher with a Master’s degree by the time she made her first vows.

But though she did teach first graders at Sacred Heart Elementary in Saratoga and at St. Francis of Assisi School in Seahurst, WA, her talents were soon put to use in the Education Department at College of Notre Dame, then in other assignments she never anticipated. One surprising opportunity for which she is grateful was the chance to attend St. Julie’s canonization in Rome.

She served in college admissions, in provincial administration, as a spiritual director, pastoral minister and hospital chaplain. Sr. Jeanne sees those diverse responsibilities as all part of St. Julie’s mission of education and respect for others.

Of all her assignments, Sr. Jeanne's favorite was her eleven years as hospital chaplain at Washington Hospital in Fremont. She admired the strength of people in crisis who were dealing with unimaginable pain and loss. “I learned and received much more than I could ever give from the courage and the spirituality of these people.”

Her long-time friend, Dolly Nicholas, was a nurse when Sr. Jeanne was appointed the hospital’s first official chaplain. Dolly remembers that Jeanne showed a great respect for other beliefs and cultures, an important ability at a hospital that treated and was staffed by people of many faiths and backgrounds. She describes Sr. Jeanne as present to all and willing to learn. Her quiet presence decreased anxiety in patients and families, and her calm attention could diffuse tense situations.She facilitated support groups, accompanied families of organ donors, and did much more. Many physicians and other staff who were initially unsure of Sr. Jeanne’s role as chaplain came to understand and value her contributions. 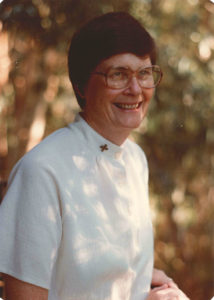 In recent years, Sr. Jeanne has faced health challenges and now lives at Mercy Retirement and Care Center, Oakland. Today, she says, “Life is very good. I read a lot and socialize with other people here. I share a table in the dining room with other Sisters of Notre Dame. Sr. Carole Proctor reads newspapers daily and shares all the news. Sr. Avelina Garcia participates in every activity here, and especially enjoys the art classes. Sr. Lucy Holguin continues to amuse us with her stories. I like British mysteries, and books about culture and politics, like those by David Brooks, New York Times columnist. As long as I have a book to read, I’m fine.”

Her friend Dolly says, “Jeanne never denied the personal impact of illness on her, but she continued to live her quiet, peaceful way.” These days, the two enjoy visits, especially when they can share the books they’ve read; they both like British mysteries!

Sr. Jeanne finds that being at Mercy is a ministry in itself. So many people, both the residents there and the caregivers, need someone to be a friend. She visits a woman with pancreatic cancer whenever she sees her door open. Many others have dementia, but they all need a friend. Friendships with staff are valued too. “This is a very good place,” she says. “The Sisters of Mercy have been serving the elderly and ill here in Oakland for well over 100 years and the mostly lay staff have caught their spirit of mercy and care. I can be a friend with others, while still being part of my SND community that is here. People like the Sisters being here.”

“I am very happy,” says Sr. Jeanne. “I have happy memories of 60 years. It is inspiring to be at Mercy. At Sunday Mass, I look around and it is heartwarming to see that people—even with all their troubles and illness—come together and worship in their own way.”

As she celebrates 60 years as a Sister of Notre Dame, Sister Jeanne is grateful for the support of the Sisters throughout her life, and to the Sisters who have been supportive of her, especially former Provincial Superior Sr. Helen Benedict.