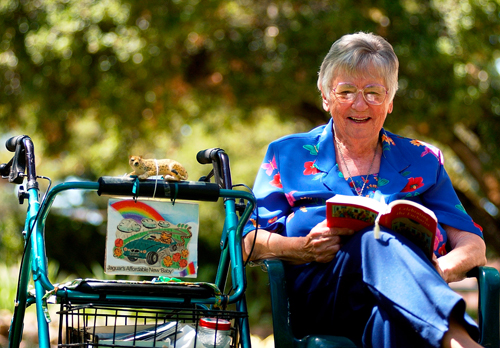 Sr. Catherine began her ministry as an elementary school teacher in Salinas, CA, in 1937 and taught in South Bay schools until she was appointed to Supervisor of Education for the Archdiocese of San Francisco in 1956. By 1959, she had earned both a B.A. and her first M.A. She was later appointed to Directress of Postulants and Junior Sisters for the Sisters of Notre Dame, always encouraging them to explore and appreciate the great religious thinkers and questions of their time. She then completed a second M.A. in Religious Studies at Catholic University, and pursued post-graduate studies at Notre Dame University, Immaculate Heart College, University of San Francisco, and Georgetown University.

In 1966, Sr. Catherine became the first women to chair the Theology Department at College of Dame in Belmont where she taught and administered for over 10 years. As Chair, she visited dozens of seminaries and catechetical centers in the United States and Europe, conducting over 100 interviews of major theologians for the purpose of discussing the major theological ideas emerging from Vatican II.  While in Rome in '69, she wrote of the Holy Week experience:

You really have to prepare yourself for a different kind of celebration of Christ's mysteries.  It is the mystery of life itself flowing through so many people who are all different.  You sense this dignity of the human person as you gaze about in the immense throng and see the beauty, the suffering and the character of the faces of the people, peasant and prosperous alike…it is truly a religious experience and it changes you.

A forward-thinking woman, Sr. Catherine anticipated the significant changes ahead for women, both in Church and society. Her own openness influenced the greater community to understand and welcome those changes.

In 1976, Sr. Catherine returned to her hometown of Santa Barbara as Director of Religious Education for Our Lady of Sorrows Parish and remained there until her retirement in 1993. For several years, Sister resided with the Holy Names Sisters at their retirement center in Los Gatos. She continued reading, studying, and reflecting on her life experiences. She spent her final few weeks at Mercy Retirement and Care Center in Oakland.

Sr. Catherine is the daughter of the late Clayton James and Gretchen Baatz McGrath, and sister of the late James Merrill McGrath and Thomas Henry (Eleanor) McGrath.  Sr. Catherine is lovingly remembered by her niece, Kathleen McGrath Crabbe, her many other nieces, nephews, and relatives, her countless former students, and by her community, the Sisters of Notre Dame de Namur.