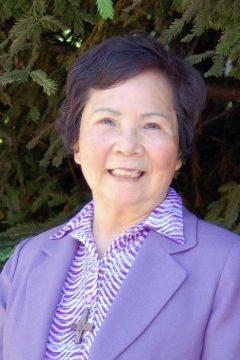 The idea of ministry and service was always part of Paula’s experience: her father was a Salvation Army officer in South Korea, and one of her sisters followed in his footsteps. Serving as a Catholic Sister, though, was definitely not anything she ever imagined!

Paula’s visit to a convent with her nursing school roommate sparked in her a great interest to understand more about the Sisters and their way of life. The call she felt to “live for God and care for the poor” was strong, but the Sisters told her that she needed first to become a Catholic, and then wait for at least three years. After entering the Handmaids of the Sacred Heart of Jesus in South Korea, Sister Paula served as a nurse in their orphanages and hospitals.

Meanwhile, Paula’s mother and most of her seven siblings had moved to the United States.  The family asked the Mother Superior in South Korea if Sister Paula could be assigned to serve in this country, where other members of their community were now serving. Five years after coming to the East Coast, she became a citizen. Coming to the U.S. in her 40s was not easy, and even after taking classes, learning to speak English was very difficult.

Sister Magdalena Yang introduced Sister Paula to the Sisters of Notre Dame de Namur in California, and she soon asked to join them. As an SNDdeN, Paula experienced parish work at St. Kevin Parish in San Francisco and helped at the Holy Family Day Home, before serving for ten years as a nurse’s aide at The Sequoia Convalescent Hospital.  For 14 years she helped at a day care facility for the elderly in San Francisco, where she was often able to translate for some of the older Korean people she met there.

Sister Paula has been faithful to the call she received more than years ago.  She feels blessed for the ways she has been able to care for the poor and to live for God, both in South Korea and in California.

“Paula is my model of living in this world; she is a loving person, respectful, very caring about the poor.  I am proud to have her as my best friend,” Mary Yi.