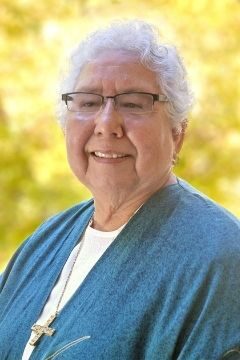 Sister Rosa Dolores, the youngest of 13 children, grew up immersed in her Mexican culture. She played "Mexican revolution" with her siblings, nephews, and nieces. Her father Pedro Rodriguez was from Guanajuato, Mexico, and fought in that revolution at age 13. At 17, he was sentenced to death, but by the grace of God and San Pedro, he miraculously escaped and came to the U.S.

When Sister Rosa Dolores was growing up, her family traveled to and from California as migrant workers. They lived in camps, but owned their home in Phoenix, Arizona. "Although we didn't have much materially, we managed and were secure in the love of our parents and in being Mexican!" she says. Her extended family included her Chavez grandparents and 14 aunts and uncles!

Sister loved learning and going to school. She played saxophone in the school band and was offered a music scholarship to Fresno State. She knew, however, that she needed to help support her family and went to work at Sears for several years. In 1966, she joined the Daughters of Charity of St. Vincent de Paul, which she says was not so much a decision as it was answering a call.

The 1989 earthquake in the Bay Area completely changed the direction of her ministry and her life. After 23 years in healthcare, Sister Rosa Dolores met the poor of the fertile Pajaro Valley and the Sisters of Notre Dame when she responded to the call for help in Watsonville. Sister Theresa Linehan remembers how Sister Rosa Dolores came to live among those who were evacuated. “Sister stayed at the shelter during the night and came to our Watsonville convent during the day. I was touched by her loving ways with the older sisters in the community and her ability to live in the shelter with those in need.”

Sister Rosa Dolores soon realized that there were few services available for the community in Pajaro. In a trailer behind Assumption Church, she started a sewing class for unemployed women. Her hope was to encourage the women and the community to come together and express their needs. When the town was flooded in 1995, there was evidence of her success toward that goal when many of the women joined Sister Rosa Dolores as leaders in the recovery effort.

In 1996, she started Casa de la Cultura's health service program, and offered classes in sewing, art, cooking, Spanish literacy and music there. The Casa became a cultural safe haven for the people of Pajaro and the surrounding areas. Sister helped with community organizing around issues such as much-needed street lights, crosswalks and housing. She worked with the County to facilitate understanding of the needs and issues of Pajaro. In time, local organizations provided grants for assistance. Currently, the focus areas of Casa de la Cultura are diabetes care, acupuncture, healing touch and adult care.

Sister Theresa and Sister Rosa Dolores began imagining how they could set up a health clinic for the workers in the fields. Whole Foods Market and the Daughters of Charity Foundation gave them the monies to buy a van to use as a mobile clinic. Rosa Dolores taught about diabetes in Spanish (as she continues to do), and Sister Theresa and other volunteer nurses screened and educated patients.

In 2003, after working with Sister Theresa and coming to know the Notre Dame Sisters, Sister Rosa Dolores asked to begin a process of transferring from the Daughters of Charity to the Sisters of Notre Dame. de Namur. She completed the process in 2007, and when the Notre Dame de Namur community officially welcomed her, the celebration was a joyful reflection of her Mexican culture.

Sister Rosa Dolores has the ability to advocate for those in need and to empower others to speak up, express their needs and participate in the cares of their communities. Her work does not go unrecognized; she has been named “Woman of the Year” from the Watsonville Chamber of Commerce and the California State Senate and the State Assembly. She was even given the honor of carrying the Olympic torch through part of Santa Cruz on its way to the 2002 games in Salt Lake City.

In 2016, at this time of her 50th Jubilee as a Sister, she said: "I am grateful for the gift of life and health; for the desire to be open to respond to wherever people's needs call me. I am thankful for my beginnings with the Daughters of Charity and for the Sisters of Notre Dame de Namur for embracing and encouraging me. I want others to be proud of who they are: their culture, their language, and to live their lives to the fullest. St. Julie always  encouraged her Sisters—all of us—to meet the needs of the time; I pray that I will continue to respond to the Lord’s call and grow in the awareness of God in my life and in others."

Click here to give a donation in Sister’s honor.