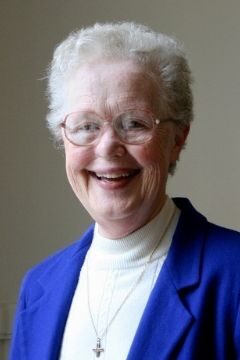 As a daughter of a hotel manager, Margaret Rose Murphy's early years included living in a series of hotel suites, and though she may have longed for a house with a lawn, her childhood was a busy and happy one with dancing, theatre, swimming and reading.

By eighth grade Roseanne was attending Notre Dame High School, Belmont, in California. Her four years there provided a solid academic foundation for future studies that included St. Joseph’s School of Nursing, Stanford University and Notre Dame University, Indiana. But it was a decision made in her senior year of nursing school that changed the course of her life. As graduation neared and weddings and engagements of other students were announced, Roseanne considered her own future and sought help from St. Joseph. Two novenas later, she had her answer and her call!

She entered the convent, and became Sister Roseanne. She went on to teach biology, general science, religion and English at her alma mater, NDHS, Belmont. Later she found her “true teaching home” at the College of Notre Dame (now Notre Dame de Namur University).

Sister Roseanne enjoyed teaching college students and serving as chair for the Behavioral Science Department for 37 years! She combined her classroom teaching with experiences in the community that included field trips to San Quentin Prison and Agnews State Mental Hospital. Twice she won a National Endowment for the Humanities Fellowship and she was the first woman to teach at St. Patrick’s Seminary in Menlo Park, Calif.

She has also had a fair share of adventures outside the classroom: “I was asked to design, find faculty and accompany 32 students to Rome for the spring semester of 1970.  I have often said that it was either the bravest thing I have ever done or the dumbest…but it was probably one of the richest experiences the students ever had.”

In 1999, given the opportunity to reconnect with alumni, Sister  Roseanne accepted the request to become the Director of Alumni Relations at the University. Then she became the Executive Director of Planned Giving and took great pleasure in encouraging support for the school.

In 2012, a gala was given in honor of Sister Roseanne's 50 years at NDNU and an endowed scholarship set up in her name.

Even if you don’t know Sister from her many years at NDNU, you may recognize her name as the author of “Julie Billiart, Woman of Courage” and “Martyr of the Amazon: The Life of Sister Dorothy Stang.” Sister Roseanne found visiting Brazil and standing on the spot where Dorothy was murdered a profoundly moving experience.

Sister Roseanne is now retired and living in community with other Sisters of Notre Dame de Namur at the Province Center in Belmont, Calif.

As she celebrated 60 years as a Sister of Notre Dame Sister Roseanne shared, “People always think you give up a lot becoming a Sister; they forgot how much you are given. I am very grateful for it all and feel so blessed.”