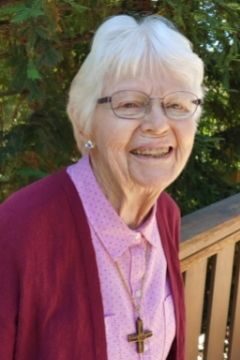 Ruth Frances Ella was born to an Austrian father and English mother who were new to the United States. Living through the Great Depression, the family learned to improvise and to make the most of what they had. She recognized that her creativity in childhood grew through improvisation, a capacity which has served her well in ministry through the years as she worked in 26 different assignments!

Sister Ruth was inspired to become a Sister of Notre Dame de Namur from her contacts with her elementary school teachers at Dolores School in Santa Barbara, Calif. In 1946 she entered and as Sister Bernard became a versatile educator.

She earned degrees in home economics, general science and science education, and served in teaching and leadership positions in elementary and high schools: Sacred Heart, San Jose; Mt. Carmel in Redwood City; Notre Dame High School in Marysville, and St. Francis High School in Sacramento were among the many schools throughout California and in Washington State. She later became a teacher of home economics at the then-College of Notre Dame in Belmont, Calif.

In 1979, Sister Ruth volunteered for mission in Kenya where she joined the staff of Egoji Teacher Training College as instructor in Home and General Science. Her early lessons in improvisation came to good use with respect to lab work in her science classes: "We created 'beakers' and 'funnels' from soda bottles," she wrote. "The caps of these bottles functioned as 'petri dishes.' Bougainvillea flowers became our 'litmus paper.'"

Later, she was invited to start Village Domestic Centres as part of the Pandipieri Catholic Centre in Kisumu. Two Sisters of Notre Dame de Namur were already working there with very poor girls. Spurred on by the enthusiasm of the people, Sister Ruth was able to establish three centres. There she drew on her home economics and science backgrounds to teach about personal growth, childcare and development, disease prevention and first aid, dressmaking/tailoring skills, nutritional food preparation, and how to start a small business!

After serving for more than nine years in Kenya, she returned to California. In 1993, she happily returned for the tenth anniversary of the Centres. She wrote: “Where once I used a book entitled Where There Is No Doctor, now computers are used as sources of information.” She says she will always be grateful for her time in Kenya, living simply among loving people. Today, the Centres continue to thrive, and have helped thousands of girls over the years.

Sister Ruth served in hospitality and coordination roles at the Sisters' Provincial House in Saratoga, Calif. at the House of Prayer in Carmel, Calif. and at the convent in Belmont, Calif. She also coordinated religious education at St. Cyprian Parish in Sunnyvale, Calif. and volunteer activities at the Province Center in Belmont, Calif. where she now resides.

Today she looks back with gratitude for a life full of blessings lived within Notre Dame de Namur, but sadly is missing the loss of Sister Margaret Hoffman who completed her earthly journey in March, 2021. They would have been remembering their special times together and sharing together the joy of their 75th Jubilee celebration. Ruth is especially pleased that she was able to bring to Sister Margaret’s funeral Mass the banner of Margaret’s artwork titled "Hearts as Wide as the World" which Ruth had brought into reality through fabric.