Jesus took Peter, James, and John his brother, and led them up a high mountain by themselves. And he was transfigured before them; his face shone like the sun and his clothes became white as light. And behold, Moses and Elijah appeared to them, conversing with him. Then Peter said to Jesus in reply, “Lord, it is good that we are here. If you wish, I will make three tents here, one for you, one for Moses, and one for Elijah.” While he was still speaking, behold, a bright cloud cast a shadow over them, then from the cloud came a voice that said, “This is my beloved Son, with whom I am well pleased; listen to him.” When the disciples heard this, they fell prostrate and were very much afraid. But Jesus came and touched them, saying, “Rise, and do not be afraid.” And when the disciples raised their eyes, they saw no one else but Jesus alone.

As they were coming down from the mountain, Jesus charged them, “Do not tell the vision to anyone until the Son of Man has been raised from the dead.”

On this second Sunday of Lent, the Church our mother, presents the Gospel which recounts the transfiguration of the Lord.

This Gospel begins by the words: “at that time…”. The particular time is not important. If we look at the entire passage, it states: “Six days later, Jesus took Peter, James and John his brother, and led them up a high mountain. He was transfigured before them.” We may ask ourselves these questions: What had happened six days earlier? Why did Jesus choose these three disciples and not the others? Yes, each of us could give our own answer while still not knowing Jesus’ response. In fact, this account of the transfiguration of the Lord is placed a little prior to the journey of Jesus toward Jerusalem, the city of his passion. It takes place not on the mountain itself, but on an elevated area. A mountain is a dry place of solitude, but also one of encounter with God. Nevertheless, Peter, James and John are dazzled by the face of Christ, shining like the sun, and by the brightness of his clothes. They saw two people: Moses and Elijah. Peter reacted in his usual manner; he was happy and wanted this unforgettable moment to last. The disciples who saw this supernatural phenomenon were in awe. As Peter spoke, a bright cloud covered them and a divine voice was heard: “This is my beloved Son, listen to him.” The disciples recognized the intervention of God, were afraid and prostrated on the ground.

The transfiguration is the manifestation of the glory of the Son of God. As on the day of his baptism, God again reveals the Son to us and invites us to listen to his teaching. In the past, it was the disciples to whom the message was addressed, but today it is addressed to us. This event prepares us for the challenge of the passion and death of Christ.

By means of this account, the evangelist Matthew invites us to conversion, transformation and a change of our lives during this time of Lent. In order to live the teachings of Christ, we should remain attached to him by setting aside a time for personal prayer during the day

On this International Day of Women, may the Lord bless and protect all women throughout the world so that they may be among those who announce the Good News. Happy Feast! Let us ask the Lord for the grace to help us encounter him in prayer so that we may become credible witnesses to his life and resurrection. Amen! 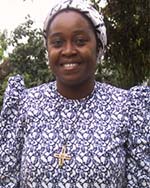 Godelieve Ziunga-Luyeye, SNDdeN is a member of the Congo-Kinshasa Province. She entered the Congregation on September 8, 1990. She made her First Vows on September 8, 1993 and her Final Vows on July 12, 2001. In 2015, she celebrated 25 years in religious life.

Since 2009, she has been the Director of Novices in her province. She has now completed this service.