Our Sisters offer summer reading suggestions, as they did in 2018. The following are just three of the many books recommended in the Sisters of Notre Dame de Namur's Seasons publication. To view or download the full issue, click here: Summer 2019 Seasons

An Ode to Nature 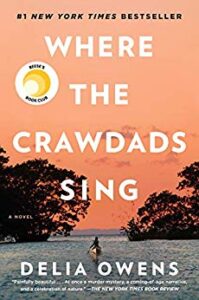 Where the Crawdads Sing by Delia Owens is so full of emotion it is hard to describe in a logical narrative. It is a full-blossomed ode to nature, especially to the myriad forms of life in the marsh off the coast of North Carolina, and it is a robust testimony to the resilience of an abandoned child and to the brilliant woman she became – a naturalist, artist and writer. While it is a story of wrenching abandonment, isolation and rejection, it is also a tale of enduring friendship and dedication.

You will be rooting for Kya and Tate, the key figures of the book, and you will love Jumpin’ and Mabel as the adult mentors everyone should have in life. Scattered throughout the book are other characters in the sleepy town of Barkley Cove, among them Chase Anderson whose tragic death casts suspicion on Kya. You think you can breathe in relief as Kya survives a murder trial, but up until the last pages suspense and emotion hold you in their grip. A MUST READ! 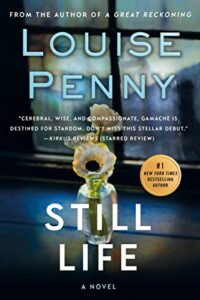 If you like fast-paced, action-packed mysteries, stop reading! If you like complex mysteries solvedin the midst of a community of fascinating people, with characters you get to really know and love, then you will want to read the engaging mysteries of Louise Penny.

Penny’s mysteries are situated primarily in the small village of Three Pines and in Montreal. One wonders if the village reflects her own small village south of Montreal. Her characters are unforgettable. Chief among them is Chief Inspector Armand Gamache, a man of integrity, strength, and charm who sometimes gets it wrong but
always admits his mistakes. Ruth Zardo, poet laureate, is FINE – you’ll have to read the books to find out what that means! And there are many more fascinating personages filling the pages.

What’s wonderful about Penny’s books – of which there are many both in print and in audio – is that you really get to know her characters, their thoughts, their feelings, their gifts and limits. They become your friends–each to a different degree as happens with the many people we meet in life.

If you can, start with Still Life, Penny’s first book. But wherever you start, you’ll want to keep meeting the wonderful people of Three Pines along with CI Gamache, Agent Beauvoir and their families as they solve cases of murder and mayhem. Be prepared to laugh, to cry, to be amazed, and to enjoy it all. 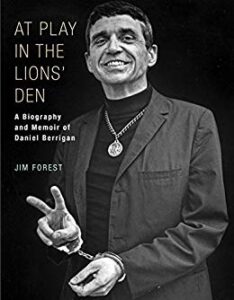 At Play in the Lions’ Den is both a biography and a memoir of Daniel Berrigan, S.J. The author, Jim Forest, was a close friend. In writing this book, he had access to Berrigan’s published works and his unpublished letters and personal papers. He also draws on his personal knowledge of him as a close friend and collaborator for many years.

Forest follows Berrigan from his youth through his formation as a Jesuit. Berrigan began his ministry as a teacher who soon realized that to make the Gospel come alive for his students he had to relate it to their lives. In the sixties, that meant dealing with issues like racism and the Vietnam War. The more he taught the more he came to understand both racism and war as incompatible with God’s commandment to love one another. He also realized that his ideals were not popular in those years.

Influenced by Dorothy Day, Thomas Merton and Martin Luther King, Jr, he spent the rest of his life working for peace by teaching, writing poetry, preaching retreats and demonstrating against any injustice especially the Viet Nam War. In 1968, he was part of a group who poured blood on records in the local draft office. The Catonsville Nine as they came to be called were arrested tried, convicted and sentenced to jail for their civil disobedience.

This did not stop Berrigan who continued his activism until his last protest in 2011 when he joined the Occupy Wall Street protesters. Although Forest admires Berrigan, he portrays a very human man with all his gifts and foibles. A skilled writer, Forest uses his words to bring Berrigan alive. He also lets Berrigan speak for himself with excerpts from his writings on each page. I urge you to read this book and meet a priest, poet and prophet who resembles the ancient prophet Daniel in the lions’ den.