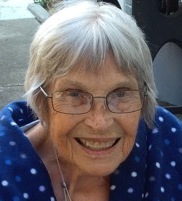 Virginia Seay was born in Palo Alto California, daughter of the late Welford (Duffy) Seay and Claire Soule Seay. On June 17, 1944 she was united in marriage to James McTague Ploeser, who preceded her in death on November 18, 1957.

Virginia (Ginny) attended Polytechnic grade school in San Marino, California and then South Pasadena High School. She graduated from Vassar College in 1944 with a degree in Music Composition, studying under internationally known composer and music scholar Ernst Krenek, who became her friend and mentor. Under Krenek’s guidance, she earned a master's degree from Hamline University in Saint Paul, MN, where one of her compositions was performed by the Minneapolis Symphony Orchestra under the direction of renowned classical musician Dimitri Mitropoulos.  In 1945 she won a national award for her composition, “San Clemente Low Tide,” which was broadcast on national radio.

When Ginny’s husband received a Fulbright fellowship to teach abroad in 1949, the family moved to the New Zealand city of Dunedin and remained for 5 years. In 1954, the family took the long way home, making stops in Australia, Djakarta, Ceylon (Sri Lanka) and Cairo and landing in Italy, where they bought a car and toured Europe. Returning to the U.S. by ship , they crossed the country by car to Los Angeles.  The family eventually settled in Saratoga in the southern part of the San Francisco Bay Area.

From 1957 to 2013 (at the age of 91!), Ginny taught in the Catholic School system for the Dioceses of San Francisco and San Jose, decreasing her hours in her later years. She taught first at Sacred Heart School in Saratoga and later at Our Lady of Mount Carmel in Redwood City. Her favorite subjects to teach were Music, History and Math. Beloved by students, teachers, and parents alike, Virginia was especially effective with the more misunderstood adolescents, with whom she connected, and who respected her in turn.

During the summers Virginia would take her family and others on road trips across the U.S., and even through Europe, tent camping most nights.