‘Longing to become in us everything You are…’ Tom McGuinness, SJ, with permission.

In these days of darkness into which we have been plunged by the pandemic, we long for light to dawn. The world seems to be covered in shadow, from the pandemic, and from the inequalities that exist in world societies.

It has been my privilege to give retreats in the past in Sweden and in Norway. I have never been there in deepest winter, only in the long summer days of August. However, I noticed that small tea-lights are kept burning all the time, even in summer. They were on the coffee trolley, on the lunch buffet tables, in the corridors and of course, in the rooms and chapels. When I enquired why lights were lit on the longest days of the year, I was told that the habit of lighting tiny lights in the long arctic darkness was a habit hard to break and that it is often continued all year round as a sort of ‘thank you’ for the hope it brings in winter. Today’s gospel is a promise that Light will indeed be cast on us, and on our world, if we ‘listen’ with hope to our God.

The mystery of the Transfiguration holds out the promise of an uncreated light which is revealed to Peter, James and John, with the promise of transforming light for each one of God’s creation. This event has a very eminent place among the Eastern churches and they like to distinguish God’s ‘uncreated’ light from the ‘created’ light of the sun and the planets. This great theophany stands as a contrast with the passage about the dark cloud of Sinai, and moves the human story to the uncreated Light of the transfigured One on Tabor. At Christmas we celebrated with John that ‘He was with God in the beginning; his life was our light; a light that shines in the dark; a light that darkness could not overpower.’ Now the promise is extended to all humankind—that we shall be transformed with him and we can now aspire to ‘theosis’; or deification; the promise that we shall ‘be like him.’ Paul describes this in 2 Corinthians: ‘And all of us, with our unveiled faces, like mirrors, reflecting the brightness of the Lord, are being transformed into the image that we reflect in brighter and brighter glory; this is the work of the Lord, who is Spirit.’ I think the phrase from a friend’s song really sums it up for me:

‘Longing to become in us, everything You are…’ Tom McGuinness, SJ

This feast is celebrated twice in our church’s year. On August 6th I’m always aware that it falls on Hiroshima Day; a symbol of the evil use of created light to burn and destroy everything in its path, leaving no living thing where life once flourished. By contrast, the Uncreated Light of God is revealed to the disciples, who witness the event on our behalf. They fall in fear, as did those on whom the deadly light of Hiroshima fell, but Jesus raises them up and when they look up, we are told that they ‘saw no-one, but Jesus only.’ Let’s realign our vision once again, as Julie did, to see ‘no-one, but Jesus only’ and ask that God’s light may rise again on our world, not only in terms of health, but in peace and justice for all those made in God’s image- God’s beloved daughters and sons. Let us pray also for our planet, that we may appreciate the wonder of the God-given light that governs our days and our nights. Only in darkness are the stars visible and as we sit in darkness, at this time when so many are suffering war as well as the pandemic, let’s look also for the uncreated light of God in our hearts and in our world. And let us hear in our hearts, too, that we are beloved daughters and sons of God.

Six days later, Jesus took with him Peter and James and John and led them up a high mountain where they could be alone by themselves. There in their presence he was transfigured: his clothes became dazzlingly white, whiter than any earthly bleacher could make them. Elijah appeared to them with Moses; and they were talking with Jesus.

Then Peter spoke to Jesus. “Rabbi”, he said “it is wonderful for us to be here; so let us make three tents, one for you, one for Moses and one for Elijah.” He did not know what to say; they were so frightened. And a cloud came, covering them in shadow; and there came a voice from the cloud, “This is my Son, the Beloved. Listen to him.” Then suddenly, when they looked round, they saw no one with them any more but only Jesus.

As they came down the mountain he warned them to tell no one what they had seen, until after the Son of Man had risen from the dead. They observed the warning faithfully, though among themselves they discussed what “rising from the dead” could mean. 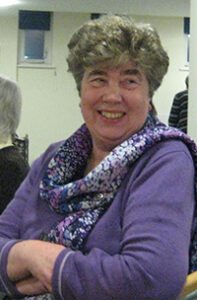 Sister Magdalen Lawler was born in London of Irish immigrant parents in early 1940 during the intensive BLITZ of London before the air defenses were in place. Her home was bombed and her father joined the RAF. Magdalen and her mother took refuge in the far north east of Scotland for the duration of the war and for a short time afterwards. When she was 11 years old Magdalen went to school at Notre Dame, Battersea. On leaving school she attended Notre Dame College in Liverpool and she entered the Congregation shortly after leaving the College and just before her 21st birthday. After profession she was sent to continue her studies and she specialized in Art and Art History, at Liverpool, acquiring a national BA degree in Art and Art history in 1967. Later, when Catholic theology became available for women, she returned to London University for a Master of Theology degree and a Diploma in Pastoral Theology from Heythrop, the Jesuit School of the University of London. In 1980 she trained in Ignatian Spirituality in St. Beuno’s Ignatian Spirituality Centre, North Wales. She has worked extensively in secondary and tertiary education as well as residential groups for young adults. Since 1980 this has been in tandem with retreat work for students and adults. Magdalen retired from formal education in 2000 and now works in pastoral formation and retreat work with various groups of adults, especially women. Her work takes her all over the UK and she has developed a great interest in the relationship between spirituality and the visual arts. She serves as Chair of the Catholic Network for Retreats and Spirituality and advises other bodies in ecumenical association with that network. This brings her into frequent working contact with Anglicans and other denominations, such as Quakers and Methodists. Art is a wonderful way into the spirituality of others and frequently helps people to find a language for their experience.